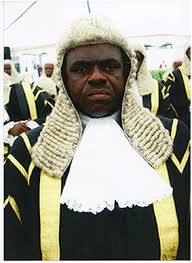 What started as a normal court sitting today, Thursday October 24, 2019 degenerated into a tension-soaked heated argument resulting in brushing and bodily moves in an attempt to secure seat spaces by some lawyers appearing before Justice Nicholas Oweibo of the Federal High Court, Ikoyi, Lagos when the case involving a popular musician, Azeez Fashola, (aka, Naira Marley) came up for hearing.

The disturbance by these lawyers to quarrel for chairs continued into the hearing despite appeals by the judge, thereby forcing him to adjourn the matter to December 11 and 12, 2019 for continuation of trial.

The musician is facing charges of internet fraud and credit card theft brought against him by the Economic and Financial Crimes Commission, (EFCC).

The fracas started between the EFCC counsel, Mr Rotimi Oyedepo and the lead counsel for the musician, Mr Olalekan Ojo, (SAN), and two other senior lawyers who were scrambling for seats to announce their appearances in court.

Justice Oweibo declined to make any further comments regarding the dispute, but appealed to the lawyers to bear with the court management over the inadequate seat spaces in the courtrooms.

A similar incident would have happened at Justice Chukwujekwu Anaeke’s court early in the morning when some senior lawyers were dragging for seat spaces which are abysmally inadequate, but the judge intervened immediately and urged the senior lawyers to speak up about the inconveniences judges, lawyers and other court users go through every working day so as to draw the attention of the authorities concerned.

The senior lawyers who were present in his courtroom when he made the passionate appeal for a better condition of the courts were: Chief George Uwechue, (SAN), a former chairman of the Body of Benchers, Chief Bolaji Ayorinde, (SAN), Mr. O. Ogunde, (SAN) and Mr. Augustine Nmuowa who all managed to squeeze themselves in the small courtroom to take their cases.

The Federal High Court, Lagos division, has about 12 courtrooms, one of which is the Lambo Hall (a conference room) which is not meant for court sittings. The other 11 courtrooms hardly can sit 15 people comfortably thereby making the situation possible for judges to engage in constant adjournment of cases because of overcrowding of the courtrooms and the subsequent inherent heat it generates.

As a matter of fact, while the judges, lawyers, litigants and other court users have to contain with the difficulties they are presently experiencing at the old court complex in Lagos which incidentally handles the 80% of the court’s cases in Nigeria, a new massive structure of the court which was started over 10 years ago is still under construction, despite the urgent need for a leverage.