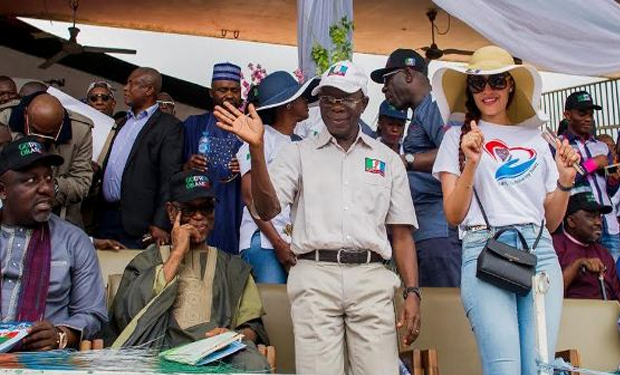 Edo state governor, Godwin Obaseki on Thursday predicted that President Muhammadu Buhari will get 1.2 million votes from Edo in 2019 general elections.
He said the Saturday Local Government election in the state, was to produce new crops of leaders who would fast-track development at the grassroots level and show the numerical strength of the All Progressives Congress (APC).
The governor disclosed this during APC Mega rally on Thursday at Samuel Ogbemudia stadium ahead of Saturday Local Government election across the 18 Local Government Areas of the state where scores of politicians from the main opposition party joined APC.
According to him, “Lets show Nigeria that Edo is APC state. Lets tell our President that he has 1.2 million votes in Edo state.
“We know that we will win the Local Government election, but we want to show that we have the numerical strength”, he said.
National Chairman of APC, Chief John Odigie-Oyegun, revealed that those in APC in this difficult times have shown passion to work for the party ahead of 2019 general elections.
On his part, former governor of Edo State, Adams Oshiomhole, admitted that the challenges in Nigeria were surmountable, just as he urged the defectors to use their skills and experience to work for the interest of APC.
He appealed to Nigerians to have faith in the country, adding that President Muhammadu Buhari has shown sufficient courage to address the problems.
The Minister of Youth and Sports, Solomon Dalung and the state chairman of APC, Mr. Anselm Ojezua, said the rally marked the final burial of PDP in Edo State.
Our correspondent reports that the Mega rally drew personalities from the world of business, politics, artisans, farmers, members of APC, chairmanship,councillorship candidates of the ruling party and their supporters.