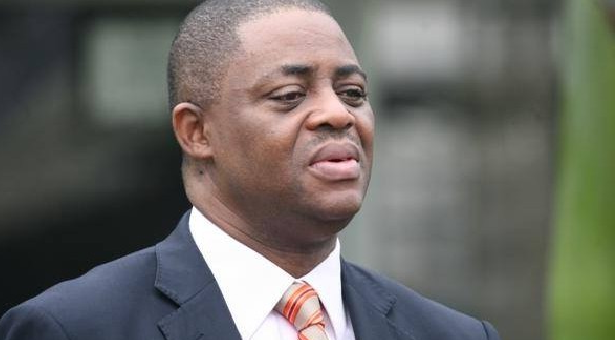 A prosecution witness, Mrs. Shedlis Gana, in the ongoing trial of the former Minister of Aviation, Mr. Femi Fani-Kayode, on Friday told a Federal High Court, Ikoyi, Lagos that she did not know if money deposited and withdrawn from the account of the former Minister, are for and from unlawful act.
Fani-Kayode, alongside Mrs. Nnanedi Esther Usman, Danjuma Yusuf, and a limited liability company, Jointrust Dimensi

on Limited, are being tried before Justice Rilwan Aikawa’s court, on charges bordering on N4.6 billion fraud, by the Economic and Financial Crimes Commission (EFCC).
At the continued cross-examination of the witness by lawyer to Usman, Mr. Ferdinand Orbih (SAN), Gana, an Abuja branch head of a new generation bank, stated that as at the time the cheques were paid and drawn into and from the account of Fani-Kayode, she believed that the transactions were lawful, and that they went through due process.
She however, stated that if there was anything unlawful on the cheques now, she may not know.
“As at the time the cheques were processed by the bank, I want to believe that they were lawful, and they went through due process, but if there is anything unlawful on it now, I may not know.
“Each of the cheques were thoroughly analysed on the reversed side.”
The witness when asked if she knew as a banker that political parties are allowed to raise fund for campaign, she said that she did not know as a banker, but as a Nigerian, she knows that political parties do raise fund.
She also told the court that she is certain that any fund raising, donations, pledges, normally passes through an account.
She also told the court that all the cheques drawn from the account of Jointrust Dimension Limited were crossed.
Gana while answering questions from Norrison Quakers (SAN), lawyer to Fani-Kayode, told the court that she was invited by the EFCC in her capacity as branch head, and that it was when she got to the commission, she was told of the purpose of the invitation.
The witness told the court that Fani-Kayode has an account with her Abuja branch, and Danjuma Yusuf has an account with Kaduna branch of her bank.
She also told the court that she wrote a statement while with the anti-graft agency. And also identified the statement when it was shown to her.
However, the prosecutor, Rotimi Oyedepo, objected to tendering and the admissibility of the witness’ statement, on the ground that it was premature for Fani-Kayode’s lawyer to seek such request.
Quakers had sought to tender the statement when he argued that there was a contradiction in what the witness told the court and the content of the statement.
Following the argument on both parties on the tendering and admissibility of the statement, Justice Aikawa, adjourned the matter till March 29, for ruling and continuation of cross-examination of the witness.
The EFCC had on May 15, 2017, re-arraigned Fani-Kayode, a former Minister of State for Finance, Mrs. Esther Nenadi Usman, one, Danjuma Yusuf and a company, John Trust Dimensions Nigeria Limited, before Justice Aikawa, on a 17-count charge of alleged fraud.
Their re-arraignment came two months after another judge of the court, Justice Muslim Sule Hassan, excused himself from the case.
The anti-graft agency in the charge marked FHC/L/C/251c/2016, accused the defendants of conspiracy, unlawful retention of proceeds of theft and money laundering.

Uncategorized
, Femi Fani-Kayode trial with others