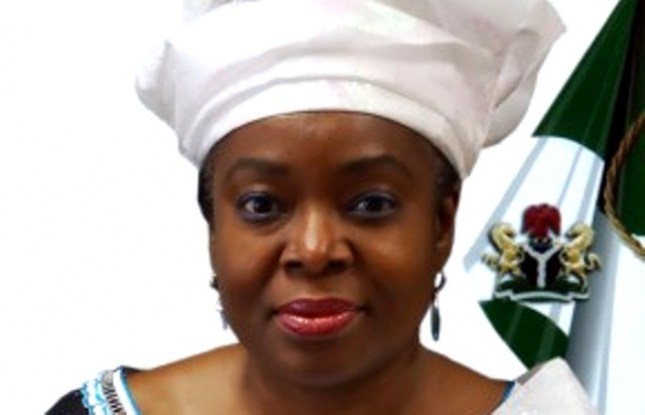 Olajumoke Akinjide, ex-FCT minister
A Federal High Court, Ikoyi, Lagos was on Friday told to expunge the evidence of an investigator with the Economic and Financial Crimes Commission ( EFCC), Usman Zakari, from the court’s record.
Former Minister of the Federal Capital Territory, Jumoke Akinjide, and two others currently facing trial over alleged N650 million fraud yesterday, through their lawyers,  Chief Bolaji Ayorinde (SAN), Micheal Lana and Akinola Oladeji, asked Justice Muslim Sule Hassan, to expunge the evidence of the investigator.
The defendants were opposed to the evidence of the witness regarding a meeting conveyed by a former Minister of Petroleum Resources, Mrs. Diezani Allison-Madueke, at her residence in December 2014. They said it is a hearsay evidence.
Ayorinde argued that the witness does not have the latitude to give evidence about the meeting because he was not in attendance. The silk said evidence of what transpired at the meeting can only be given by those in attendance.
“The witness can only say that I discovered that there was a meeting and cannot say what transpired at the meeting because he did not attend it.  The witness cannot give any further evidence as to what transpired at the meeting. I urged the court to expunge any evidence relating to what transpired at the so-called meeting if ever there was any”, he said.
In his own submissions, 2nd defendant’s lawyer, Micheal Lana, said the witness cannot go beyond his investigation.
“Section 37 of the Evidence Act which deals with hearsay did not exempt an investigative officer from its narration. Also, Section 126 of the same Act which deals with direct oral evidence did not exempt an him from stating what he did not hear or perceived.
“The witness can even not be cross-examined about what happened at the meeting because he was not in attendance. What he did not do, he cannot testify on it. I urged the court to expunge his evidence from the record”, the lawyer said.
The 3rd defendant’s lawyer, Akinola Oladeji, also aligned himself with the submissions of other defence lawyers.
The EFCC, through its lawyer, Rotimi Oyedepo, is however contending that Zakari’s evidence was his personal findings in the course of his investigation.
“The evidence given by PW2 of his investigative findings cannot be hearsay. In view of the fact that the evidence that PW2 gave was the discovery he made in the course of his investigation, the law is settled that such evidence cannot amount to hearsay,” Oyedepo said.
Ruling on the contentious issue has been fixed for April 9.
In his testimony, Zakari told the court that the meeting was attended by Diezani, the Managing Director of a bank and some oil marketers.
At the meeting, the ex-petroleum minister, according to Zakari, informed the bank’s MD that the oil marketers would be bringing different dollar sums to him, which she instructed the bank chief to help her keep in the bank’s vault until further instructions.
Zakari said pursuant to the meeting, one Autus Integrated Limited took $17.8 million to the bank; another company, Northern Belt Oil and Gas, took $60 million to the bank; while one, Mid-Western Oil Services Limited also paid $9.5 million.
“An individual, Lano Adesanya, brought the sum of $1.8 million. Our findings further revealed that the three oil marketers made payment of the sum of $89 million and some fractions. Investigations further revealed that the then petroleum minister’s aides made available $25 million and some fractions in suitcases, which were warehoused in the bank’s cash vault.
“Upon the receipt of the money by the bank, the former minister instructed it to convert the said amount into naira, precisely on March 26, 2015. The bank complied with the instruction; the said amount was converted into naira to the tune of N23 billion and some fractions.
“After the conversion, the former petroleum minister instructed the bank to pay the 1st defendant (Akinjide) and the 2nd defendant (Senator Ayo Adeseun) and one, Mr. Yinka Taiwo, the sum of N650 million, through her son, Ogbonna Madueke.
“The 1st defendant and the 2nd defendant and Mr. Yinka Taiwo then proceeded to the Dugbe branch of the bank in Ibadan, Oyo State and signed a receipt of payment individually for the collection of N650 million.
“They signed for the money and took it to the residence of the 1st defendant (Akinjide).
“The defendants made a cash payment of N650 million without going through any financial institution, an amount which was more than the amount authorised by law to be paid in cash,” Zakari said.
Judiciary, Slider