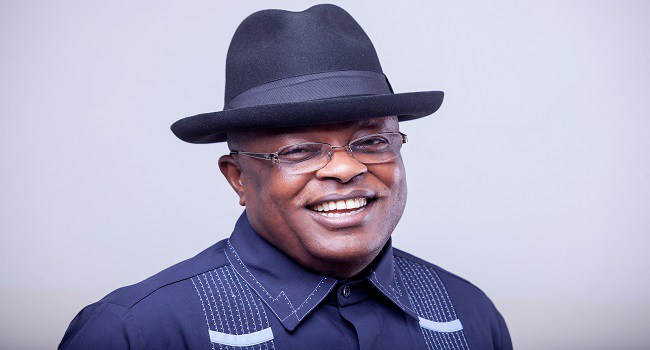 Ebonyi State governor, David Umahi has said that despite the resignation of the former Secretary to the State Government,(SSG), Prof. Bernard Odoh, he would not be distracted with his administration moving ahead and providing more democracy dividends to the people of the state, particularly those from Ezza Clan.

Umahi who stated this at the Government House, Abakaliki during a solidarity rally by the people of Ezza Ezekuna Clan comprising Ezza North and Ezza South local government areas of the state,assured the people of his administration’s readiness to improve their standard of living through the provision of infrastructural facilities.

The governor who earlier accepted the resignation of the former SSG, announced his sack and appointed Dr. Hyginus Nwokwu as the new SSG of the present administration.

Umahi further lamented that despite the love he showed the former SSG
even though he was not a member of his political party, the PDP at the
time of his appointment, the young man still stabbed him at the back.
“I appointed him SSG because I felt he was a responsible Ezza man.
Many people faulted his appointment because he was not a PDP member
but an APGA senatorial candidate in 2015 general election. Since his
appointment, I have shown him love and assisted him so many ways. I
called him to my country home and told him that the case of murder is a
very serious one. I asked him to see me but he switched off his phone
throughout the Easter period and the next thing I heard was his
resignation letter flying up and down in the social media”.
Governor Umahi also announced the immediate appointment of Dr. Hyginus
Nwokwu as the new Secretary to the State Government and described him
as a round peg in a round hole.
Dr. Nwokwu before his appointment was the Deputy Director General of
Divine Mandate, a political platform in which Governor Umahi ran his
campaign in 2015 general election and also hails from the same Ezza
North local government area of the state with the sacked SSG.
Speaking earlier during the solidarity rally by the Ezza nation,
member representing Ikwo/Ezza South federal constituency, Laz Ogbee
said they were in government house to disassociate themselves and
entire Ezza nation from what he described as shameful action of the
former SSG.
He said his action did not reflect the character of Ezza man, adding
that he took the unilateral decision to embarrass the state government
without any recourse to his people in whose trust he held the position
of Secretary to the State Government.
Mr. Anayo Edwin Nwonu representing Ezza North/Ishielu federal
constituency described the action of the former SSG as embarrassment
to the image of Ezza nation and called on the Governor to disregard
the development as the entire Ezza nation will give him massive
support in 2019 governorship election.
Others who spoke during the rally included the Chairmen of Ezza South
and Ezza North local government areas, Sunday Ogodo and Mrs. Nora Alo,
Senator Paulinus Igwe Nwagu, Chief Geofrey Chukwu, Mrs. Euphemia
Nwali, the Commissioner for Water Resources, member representing Ezza
North state Constituency, Mr. Victor Chukwu and the State Secretary of
PDP, Chief Simbro Nwanyingor as well as Ezeogo Nwite Ngele among
others.
They lauded Governor Umahi for appointing many Ezza sons and
daughters into positions of trust and assured him that the people of
Ezza nation will vote massively for his re-election come 2019.