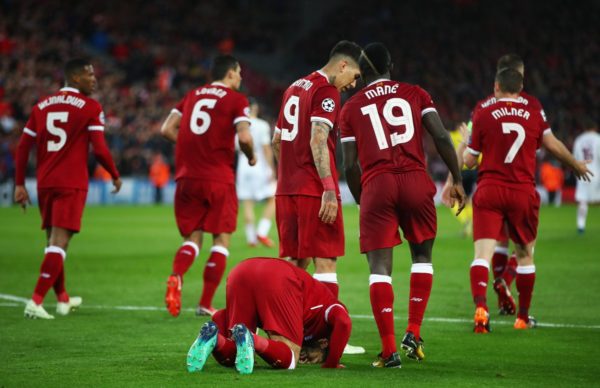 Two superbly taken goals from Mohamed Salah gave Jurgen Klopp’s side a 2-0 lead at halftime as Liverpool took a big step towards the UEFA Champions League final with a 5-2 win over AS Roma in their semifinal, first leg at Anfield on Tuesday.

Two late Roma goals, however, will give the Italians, who came back from 4-1 down to beat Barcelona in the previous round, some hope of an upset in the return game next Wednesday.

A Sadio Mane goal and then two Roberto Firmino goals put Liverpool 5-0 up and Klopp felt comfortable enough to take off Salah, who had been outstanding.

Yet Edin Dzeko struck for the visitors in the 81st minute and four minutes later Diego Perotti converted a penalty to generate some tension for the return in Rome.

Liverpool boss Jurgen Klopp, in his post-match reaction noted that it was an overall good performance by his team even though they lost a little concentration towards the end of the match.

“Long term perfect performance for pretty much 80 minutes or so. We made defensively one mistake.Penalty is not a penalty but that is the situation and now it is 5-2.

“We had all these runs behind, it changed the game completely and they couldn’t cope with that.

“We scored these goals and could have scored more. That is all positive, at this moment it doesn’t feel all positive because they scored these two goals but tomorrow I will see the really good part of the game.

“It is absolutely better than I thought before the game but at the moment of course a little mistake,” he said.

Bayern Munich and Real Madrid meet in the other semifinal on Wednesday. (Reuters/NAN)