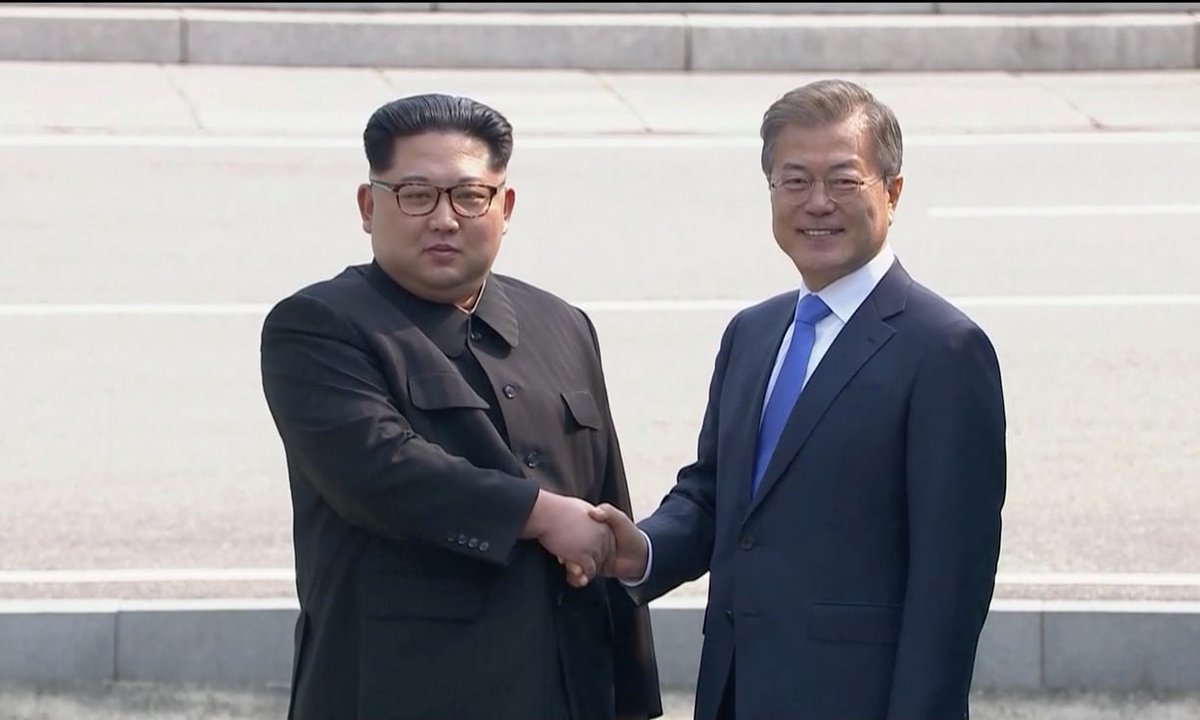 The leaders of the two Koreas made their way to the heavily fortified demilitarized zone between the countries early on Friday, seeking to end their decades-long conflict and ease tensions over the North’s nuclear weapons programme.

South Korean leader, Moon Jae-in arrived first at the Joint Security Area of Panmunjom shortly after 9 a.m., about one hour after he left his presidential office Cheong Wa Dae in Seoul.

With precision, North Korean leader, Kim Jong Un arrived at 9.29 am for the historic summit set to start at 9:30 a.m. He crossed from the ~North Korean side of the border by foot to the South. The two leaders shook hands, with Kim inviting Moon to also cross the inter-Korean border.

Kim will be the first North Korean leader to set foot in the South since the 1950-53 Korean War.

The two are expected to talk denuclearization and exchanges between the Koreas and also will plant a memorial tree at the border truce village of Panmunjom as part of the first inter-Korean summit in more than a decade.

Friday’s summit will set the stage for Kim to meet with U.S. President Donald Trump in late May or early June, in what would be an unprecedented first encounter between sitting leaders of the two countries.

Just months ago, Trump and Kim were trading threats and insults as North Korea’s rapid advances in pursuit of nuclear-armed missiles capable of hitting the United States raised fears of a fresh conflict on the Korean peninsula.

Hundreds of demonstrators were seen gathering in downtown Seoul from early morning to protest or support the summit.

Scepticism has been rampant about whether Kim is ready to abandon the hard-earned nuclear arsenal his country has defended and developed for decades as what it says is a necessary deterrent against U.S. invasion.

The two neighbors expect to release a joint statement late on Friday – possibly called the Panmunjom Declaration – that could address denuclearization and peace, and an improvement in relations, South Korean officials said.

Impoverished North Korea and the rich, democratic South are technically still at war because the Korean War ended in a truce, not a peace treaty.

The United States stations 28,500 troops in South Korea as a legacy of the Cold War conflict, which pitted the South, the United States and United Nations forces against the communist North, backed by China and Russia.

On Thursday, Trump said he was considering three or four dates as well as five locations for his meeting with Kim, although once again he added that it remained unclear whether the meeting will occur.

“It could be that I walk out quickly – with respect – but … it could be that maybe the meeting doesn’t even take place,” he told Fox News by telephone. “Who knows. But I can tell you right now they want to meet.”

The White House released two photographs of then Secretary of State-designate and CIA chief Mike Pompeo’s meeting with Kim in North Korea over the Easter weekend to discuss the planned summit. It was Kim’s first known meeting with a U.S. official.