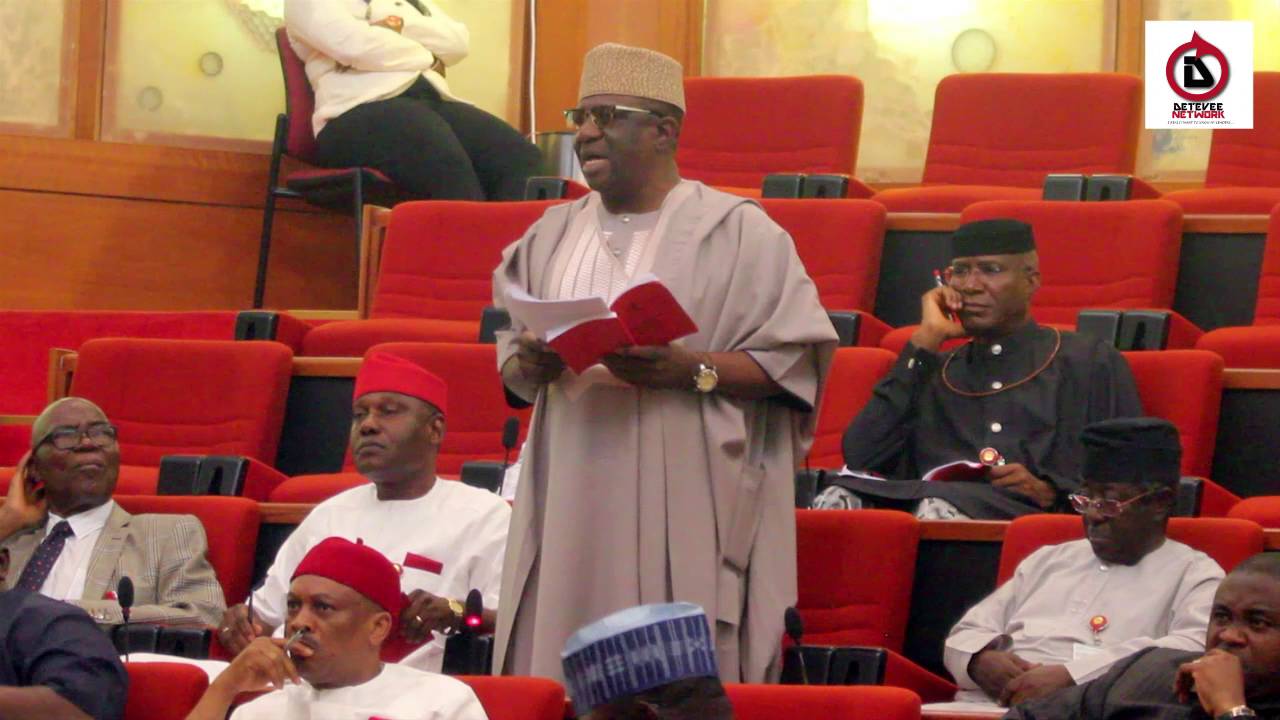 Senator Urhoghide moving the motion for President Buhari’s impeachment at the Red Chamber.
A group under the aegis of Edo South Youth Coalition, on Friday, threatened to begin the process of recalling Senator Matthew Urhoghide  for daring to move a motion calling for the impeachment of President Muhammadu Buhari if he fails to apologise to him and retract his earlier statement within 48 hours.
The group in a communique issued and signed by its leader, Hon. Ehis Odiase and made available to newsmen in Benin City said having reviewed the circumstance resulting in the motion for impeachment moved by Senator Matthew Urhoghide against President Muhammadu Buhari, they have come to understand that he did not consult the Edo people whom he claimed to represent nor did he seek the opinions of other senators from Edo State in the Red Chamber before his impeachment motion.
Odiase said following his action, they have no option but constrained to note that the move by Senator Uroghide is self-seeking and borne out of selfish motives which are not in tandem with the wish of Edo people in the South Senatorial Zone.
He said for the avoidance of doubt, he should take a cue from Senator Ehigie Uzamere who performed excellently and was on the same page with his people.
He said it is lamentable to note that Uroghide did not take any action when the confirmation of an Edo citizen who was nominated to head Nigeria Energy Regulatory Commission, NERC  was stalled.
He reiterated that Edo people are in support of the anti corruption fight of Mr. President as corruption is the bane of Nigeria’s development, consequently, any action to the contrary is anti democratic.
He said Edo people are respectable people with high regard for the elderly adding that the senator’s motion was an affront of the culture of respect for the aged which our people are known for and therefore is condemnable.
He said Edo State is known to have produced respectable Senators of repute including but not limited to Senator Prof. Osarieme Osunbor, Obende Domingo, Owie, Isah Braimoh, and others who have made tremendous contributions in their time and held up the emblem of democracy at the Senate and will certainly be ashamed of the action by Senator Matthew Uroghide.
The leader of the group further advised that he should focus on delivering projects and serving his people whom he has neglected for so long.
In his reaction, Senator Matthew Uroghide in a telephone interview, berated those  calling for his recall for moving a motion that President Muhammadu Buhari should be impeached noting that they are ignorant of the law and workings at the national assembly.
However, the Edo State chapter of Peoples Democratic Party, led by Chief Dan Orbih has commended Senator  Uroghide for his bold step at the national assembly.
According to him: “Edo PDP has been watching with keen interest the goings-on in the nation especially the state of insecurity and the illegal withdrawal and spending of state resources without following due and constitutionally prescribed process.
“We hereby state that we support the current effort by members of the National Assembly to stem this ugly tide. No nation can survive under the weight of executive tyranny, hence we call on all Nigerians to come out and voice their support for members of the National Assembly who recently are being harassed, intimidated and persecuted for daring to speak out.
“The legislature all over the world is the key component of democratic practice. No nation can survive under the weight of executive dictatorship as we are experiencing under the Buhari presidency. Any attempt to undermine their constitutional role will spell doom for our democracy .
“We commend distinguished Senator Matthew Urhoghide, Chairman Public Accounts Committee, for his quality representation of Edo South Senatorial District and our party, Peoples Democratic Party, PDP. He has justified our confidence by his incisive, quality and patriotic contributions in the senate at this hour of our democratic trials.
“We call on all members of the National Assembly not to relent in their effort in repositioning our democratic values where the Three Arms of Government are allowed to play their role in the overall interest of the nation. Edo PDP stands with the National Assembly and the Nigerian people”.
Politics, Slider