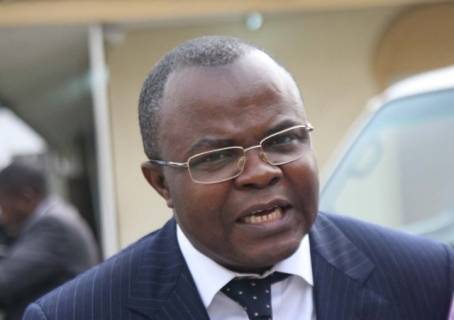 Mr. Ugwuonye.
The Supreme Court has finally struck out the name of controversial Lagos lawyer, Mr. Emeka Ephraim Ugwuonye, from its roll. The apex court’s decision to delist the lawyer was conveyed to him in a letter dated 24 April, 2018. The letter (Ref No. 197/SCN/LIT/100118) was signed by Mrs. Gertrude B Bari-Nyana on behalf of the Chief Registrar of the Supreme Court, titled: “Re-BB/LPDC/217/16 Nigerian Bar Association V. Ephraim Emeka Ugwuonye”.
“This is to notify you of a notice issued by the Legal Practitioners Disciplinary Committee to the effect that your name be struck off the Roll of Legal Practitioners, after you were tried and found guilty of infamous conduct in the course of the performance of your duty as a legal practitioner as set out in count 1, of the Complaint, contrary to Rules 23 and 55 of the Rules of Professional Conduct in the Legal Profession 2007 and punishable under Section 12-(1)-(a) of the Legal Practitioners Act as amended,” stated the letter.
The notice, explained the letter, was dated 22 May, 2017. It equally stated that in the absence of an appeal after the stipulated time within which to appeal has lapsed, Mr. Ugwuonye’s name was validly struck off  the roll of legal practitioners. The letter unambiguously stated that Ugwuonye “is not entitled to practice as a Barrister and Solicitor of the Supreme Court of Nigeria.”

In addition, the letter said any letter issued to him before now on his enrollment status becomes immediately null and void.
The Legal Practitioners’ Disciplinary Committee (Body of Benchers) had found  Mr. Ugwuonye guilty of grave professional misconduct and in its ruling, ordered the Chief Registrar of the Supreme Court to strike off the lawyer’s name  from the roll of legal practitioners in the country.
According to the Certified True Copy of the Body of Benchers’ decision, Mr. Ugwuonye was accused, in a petition by one Ms. Victoria Ekweani, of failure to disclose his personal interest in subject matter of her brief. Ms. Ekweani said she engaged Mr Ugwuonye’s services to secure and protect her interest as next of kin in the estate of her late sister,  Ms. Ifeoma Ekweani.

However, Ms. Ekweani said the lawyer  failed to execute her brief. Instead, filed an application at the Enugu State Probate Registry for the issuance of Letters of Administration to him, purportedly as the fiance and creditor to the deceased.

Ms. Ekweani’s allegations were investigated by the Nigerian Bar Association Disciplinary Panel ‘B’, Lagos.
In its ruling, the Body of Benchers, said it was persuaded that Mr. Ugwuonye deserved to be sternly sanctioned.

“We are satisfied that the appropriate order to make in the circumstance is to direct the Chief Registrar of the Supreme Court to strike out the name of Ephraim Emeka Ugwuonye from the Roll of Legal Practitioners and we so Order.

“Our order shall forthwith be brought to the attention of the Chief Registrar of the Supreme Court.

“We further order that notice of this direction be immediately brought to the attention of the respondent by service on him personally or to his last known address and by publication in any edition of The Punch Newspaper and also by publication in the Federal Gazzette as required by law,” said the Body of Benchers.

The latest development puts an end to the controversy over his enrollment status in the Nigerian Bar. His enrollment number, SCN019368, is effectively struck off the Supreme Court Roll.

Meanwhile, SaharaReporters learned that the family of Ms Ekweani is set to start criminal proceedings against Mr. Ugwuonye for breach of trust. If this succeeds, he may spend seven years in jail.

Mr. Ugwuonye’s career as a lawyer has been pock-marked by scandals. In 2013, the US District Court in Washington DC issued a default judgment against the lawyer in a case about conversion to personal use of $1.55milllion tax refunds in a property transaction he executed on behalf of the Nigerian High Commission in Washington DC. The lawyer was found liable on all claims filed against him and the court awarded $2million damages against him, while also ordering him to pay, with interest, the money he took inappropriately.

In 2010, he was disbarred by the Attorney Grievance Commission in Maryland and subsequently in New York after being found to have duped his clients. Unable to practice in the US, Mr. Ugwuonye returned to Nigeria and continued with a variety of dodgy schemes, including using a Facebook page to defraud people.