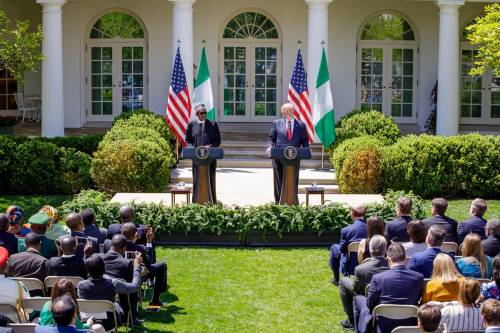 President Buhari and President Trump addressing the media at the White House.

Ahead of President Muhammadu Buhari’s ongoing visit to the United States, some groups in the country have told their policy makers to inform US President, Mr. Donald Trump, to tell his Nigerian counterpart to confront the ethno-religious killings that have made Nigeria a killing field in Africa.

In a 24 April memo to US policy makers exclusively obtained by SaharaReporters, the groups noted that Nigeria is a  partner to the United States and has Africa’s largest population and economy. In addition, the US noted that Nigeria is a leader in business and culture and has had many of its citizens become naturalized Americans.

The groups told the policy makers to tell Mr. Trump to impress it upon President Buhari that impunity and violence with ethno-religious texture  threaten Nigeria’s stability and diminish trade with U.S. companies, a situation that encourages mass migration of people fleeing violence.

“Thus, confronting these challenges is in the economic and security interests of the U.S. This Administration is an important partner for Nigeria; it was heartening to see President Trump host Joy Bishara and Lydia Pogu, two of the “Chibok” girls kidnapped by Boko Haram. Unfortunately, the perceived impunity enjoyed by Boko Haram seems to have emboldened radical elements within the nomadic Fulani ethnic group that have adopted increasingly violent tactics,” the memo said.

Despite the occasional description by  President Buhari and local leaders such as the Sultan of Sokoto of Boko Haram attacks as “terrorism,” said the memo, weak law enforcement and a lack of the rule of law enables the ongoing violence, resulting in higher social tensions between Christians and Muslims and providing more opportunity for terrorist organizations. “Where small skirmishes between herders and farmers used to be settled by local leaders, a rising tide of violence threatens stability.

It noted that while Boko Haram is more well known, Fulani extremists killed more people in 2016. It equally noted that terror groups (Al-Qaeda & Islamic State) are radicalizing previously peaceful Fulani people in surrounding countries such as Mali, which has already resulted in deaths of members of the U.S. military.

The groups opined that without increased security or prosecutions of attackers, victims are taking the laws into their own hands, resulting in reprisal attacks that can affect even innocent citizens.

It also noted that in addition to internally displaced people, Nigeria has the second highest mass migration (approximately 19 ,000 people) pouring into Europe from the Mediterranean since January 2017.

“Some within Nigeria have explained the increased violence as a result of cattle rustling. However, any theft of property should be addressed through proper legal channels, not mass murder of villagers. We urge President Trump to offer U.S. assistance to counter these challenges and press President Buhari to alleviate the challenges posed by the increased violence against communities,” the memo added.

It called on the Nigerian government to ensure that all citizens are protected equally regardless of their ethno-religious affiliation, provide timely security assistance when given credible reports of impending attacks and take tangible steps to ensure the rule of law is applied without regard to ethno-religious affiliation, including creating credible, transparent and impartial investigations of attacks that result in bringing perpetrators of violence to justice.

The memo also urged Mr. Trump to expand the US-Nigeria coordinated efforts for law enforcement and legal training, monitoring and prevention of violence, and distribution of humanitarian assistance targeted at rebuilding the lives of the victims of Fulani extremists and forestalling mass migration.