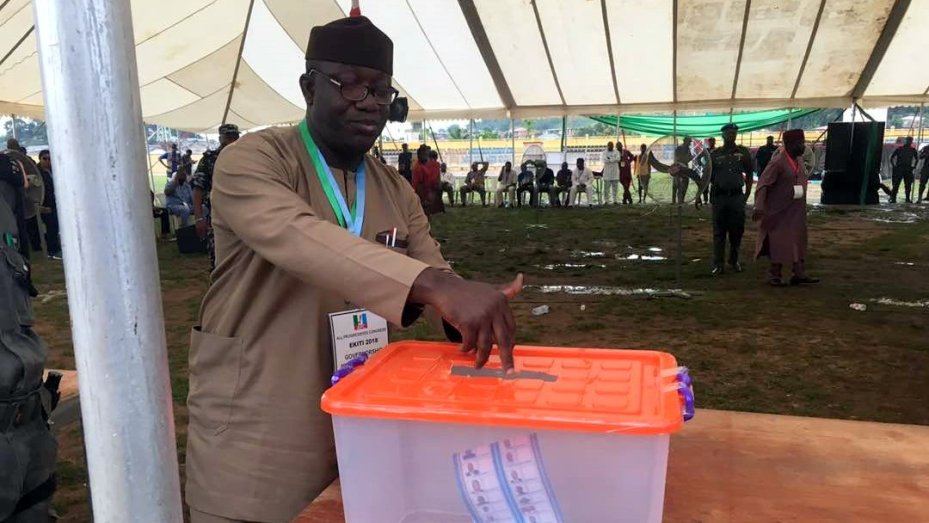 The leading governorship aspirant says the party does not deserve the type of ridicule which the shameful act of the hoodlums had subjected it to.

The Minister, in a statement by his Special Adviser on Media, Mr Yinka Oyebode, said the disruption of the primary election was the height of desperation on the part of some aspirants, who having seen defeat staring them in the face, conspired together to ensure that the exercise was not concluded.

Fayemi said the aspirants resorted to violence and destruction, having realised that he was already in a clear lead in the five local governments that had cast their votes.

Dr Fayemi, who said he was not surprised by the disruption of the exercise, revealed that the security agencies had, a few days to the primary, been notified of plans by some aspirants to deploy hoodlums to disrupt the voting exercise.

He, however said that the security agencies took note of the information and promised to beef up security at the venue.

“It is quite painful seeing some desperate elements trying so much to rubbish the party we all laboured to build to national reckoning out of share lust for power.

“If the quest for political position is to serve, then one wonders why the desperation being displayed by the likes of Femi Ojudu and Bimbo Daramola.

“Certainly the conduct of these desperate aspirants falls short of the minimum standards expected of anyone that professes progressive ideals.

“We urge our teeming supporters and loyal party members not to be discouraged by this despicable act. This surely shall pass, and better days are ahead. Our collective rescue mission has indeed begun.”

Also, the forrmer Governor Segun Oni who is also an aspirant in the governorship race on Sunday advised  the National Chairman of the All Progressives Congress(APC), Chief John Odigie-Oyegun  and the National Working Committee (NWC) of the party on the need to investigate the errors that led to the inconclusive  Ekiti governorship primary .

Specifically, Oni, former  APC National Deputy Chairman (South ) said the way some people who were discovered to be friends of a particular aspirant were nominated into the Ekiti governorship primary committee put the  integrity of the party’s national leadership to question.

Oni said the election had got to the fifth local government when some agents had raised serious allegations bordering on fraud against  the  agent to the Minister of Mines and Steel Development, Dr Kayode Fayemi  and that led to the disruption of the election.

He however saluted the chairman of the governorship primary and Nasarawa  State governor, Alhaji Tanko Al-Makura  for doing a thorough job only for his efforts to be allegedly sabotaged by unscrupulous elements around him.

Oni, who   described the  violence as very unfortunate, said Oyegun must investigate how  the Secretary , Hon. Mogaji  Aliyu , a known ally of  one of the aspirants  was made  member of the committee.

“Those who have penchant for cheating and fraud structured the primary to favour a particular aspirant. I was the APC National Deputy Chairman for four years, despite that I never used  my position to influence anything about a primary I was directly involved.

“When you have penchant for fraud or to cheat the sytem, it makes democracy to look sour and uninteresting.

“Even the fraud festered to the ranks of the security agencies. I quite appreciate the fact that violence was not the right way but it was caused because of  pent  up anger.

“That is why the NWC led by Chief Oyegun  owes all of us a thorough  explanation  about how Mogaji found himself in the committee  and how to prevent such in future, except that we are hiding under democracy to fool ourselves.

“ Whether I will be governor or not or hold political office in the future, I think enough is enough about people being desperate to get positions , because we must give confidence to our people”.

When asked whether consensus will be best option, Oni said he quite support the idea but such would be difficult to attain with the level the fierce battle has reached.

“I support consensus but now impossible , because the perception of the society  makes it difficult for politicians to reach compromise .

“Politicians are always under pressure from their admirers and announcing to them that you have stepped down for someone who could create bad impression about you, so it will be difficult to achieve at this level”, he added.

Similarly, Senator Babafemi Ojudu has dispelled the allegation that he and Hon. Bimbo Daramola allegedly masterminded the violence that marred the primary, describing it as spurious and senseless.

Ojudu clarified that he never exhibited any desperation and that accounted for why he didn’t go to the election venue with party supporters. I even hates seeing thugs around me.

“They said I was desperate, let us ask ourselves, who among the aspirants took delegates to Igbara Oke and Owo in Ondo State to camp? It was Fayemi.  He was the one who compromised the committee and bought over security agencies to compromise the system.

“I brought him to Ekiti, I did a lot for him to be governor, so I had always known him to be desperate and we were getting video clips about how he offered bribes to delegates and  how he was making calls at the election venue to top security brass in Ekiti and Abuja to cheat the system

“Let me tell him, all these antics will not work. The primary will be conducted and it must be free, fair and credible”, he said.

Meanwhile, the Peoples Democratic Party in Ekiti State have warned the All Progressive Congress leadership not to bring “their absurdity of violence and bloodshed to Ekiti State again against the backdrop of the fiasco that characterized their primary election at the Oluyemi Kayode Stadium on Saturday”.

A statement by the PDP State Publicity Secretary , Mr Jackson Adebayo, says the violence that erupted at the APC primary does not come as a surprise as the party is synonymous with crisis, killing and violence.

PDP said,”APC as a party is populated by blood sucking demons in human skin, hence it will be a self delusion if anybody is expecting a peaceful outing from them”, adding that in Nigeria today it is only APC controlled states where it’s one day one killing .

Adebayo said that Ekiti  would not allow the APC to again reinvent their spirit of violence in the state pointing out that Ekiti State started enjoying relative peace immediately after the exit of APC in 2014 when Governor Ayodele Fayose took over the mantle of government after defeating Dr Kayode Fayemi in all the Local governments in the state.

According to the PDP spokesperson, the violence that characterized the primary of the APC in the State only serves as a reminder of the ugly reign of terror experienced during it’s past government in the state, saying that Ekiti can’t afford to return to the dark era again.

The party said it thought that the leadership of APC would have learnt some lesson from the peaceful atmosphere that has returned to Ekiti through the leadership of Governor Ayo Fayose since 2014 till date to direct them in their quest to participate in the July 14 governorship election; but unfortunately the leopard of APC had refused to change its skin, hence the display of extreme lawlessness at their primary last Saturday.

PDP however noted that it seems that there is nothing that can change the bloodletting mind of the leadership of APC hence we call on all good people of Ekiti State to plead with the party to take their primary and other activities to another place instead of disrupting the peace and tranquility that we enjoy in the state now.

“As a co-political party we can advise them to move their primary to the Federal Capital Territory where there are enough security apparatus that can assist them to tame or hang their leaders who have erroneously seen violence as part of the game.”