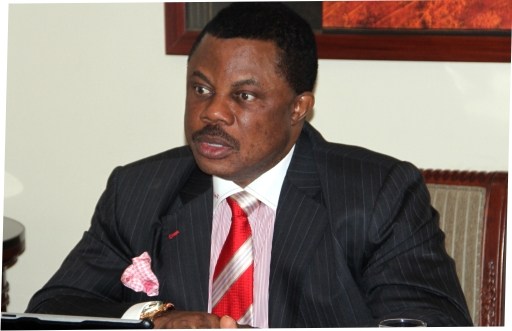 Obiano, Anambra State governor.
By Titus Onye, Abakaliki
Piqued by renaming of Abakaliki Street in Awka, Ebonyi State House of Assembly has given a seven day- ultimatum to  Anambra State Government to reverse it, saying that failure to do that,  the House will mandate Government of Ebonyi State to rename all structures named after Anambra people and towns with immediate effect.
This was the resolution of the House after its plenary, where they also resolved that Anambra State Government must also apologise to the people of Ebonyi State.
A street hitherto known as ‘Abakaliki Street’ in Awka, was recently renamed ‘Club Street’ by Anambra State Government, but the people of Ebonyi State are not happy with the development.
Governor David Umahi had in a press statement through his Chief Press Secretary, Mr. Emmanuel Uzor, who condemned the action of Governor Willie Obiano, for renaming the street, saying that most states in the region especially Anambra always seize every opportunity to look down on Abakaliki man and urged them to eschew the discrimination.
Though, Chairman of Awka South Local Government Area, Mr Leo Nwuba had while reacting to the condemnation noted that contrary to the recent uproar in the media over the renaming of the street, a new street had long been designated to be named Abakaliki Street within the Capital City.
He added that the renaming of the street as ‘Club Road’ was part of the on-going efforts to interpret the Awka City Master Plan.
But during yesterday plenary, the Ebonyi House of Assembly expressed displeasure over the action of Anambra State Government, insisted that the street must be restored back to Abakaliki Street if the existing cordial relationship between the two states was still important to Anambra State Government.
Addressing newsmen in Abakaliki over the resolution of the House, the Chairman, House Committee on Information and Member representing Ikwo South State Constituency, Hon. Chike Ogiji, said the decision became necessary because the action was not only embarrassing but a threat to the unity of Igbo Nation.
He said it was worrisome that government of Anambra State could rename a street named after Abakaliki which had existed for years;an indication that it had no regard to the cordial relationship that had existed between the two States.
Ogiji who is also the sponsor of the motion said aside the fact that every successive government in Ebonyi State had always accommodated Anambra sons and daughters in governance of the state, many streets, towns and halls within the capital city were also named after Anambra people and towns not minding that they have prominent sons and daughters to name after the structures.
His words: “The matter in question was sponsored by me. It became important that the sanctity and the relationship that has existed over the years the people of Anambra and Ebonyi is sustained in any account.  Recall that no government after government that has not featured prominently either a son or daughter of Anambra in the government of Ebonyi State.
“It will also be interesting to note that most of the major streets and towns either named after Anambra men’s name or towns to the extent of having Aniocha, Awka, Onitcha streets, all of these are prominently residing in the heart of Abakaliki capital city.
“It is not only that it is embarrassing to the people of Ebonyi, it is also a pointer to the fact that it is a  threat to unity of Igbo Nation. And I feel that people of Igbo Land should rise up to it; just as the Ebonyi State House of Assembly resolved that if after 3rd of July 2018, that same street is not restored back to Abakaliki, the government and the people of Ebonyi have been mandated by the House to change every city, every street, every town and halls that bear Anambra man or town’s name.
“It is not as if we don’t have prominent sons and daughters to name after these structures, but we did not want to lose the sight of the fact that we are one as Igbo nation. Any person from any part of Igbo Land can go to any part of Igbo land and be protected.
“And for Anambra Government to rename a street that has outdated the present government in the state and named it after a club, an immoral institution, is embarrassing; and should be of serious concern if we are really talking about the unity of Igbo Nation.
“It was after diligent deliberation that the House resolved that the same street must be restored to read Abakaliki Street as it was. They should not take Abakaliki Street to any other place. It must be at the same place where it was and apologise to the people of Ebonyi State. Otherwise, the unity of Igbo Nation is threatened”.
Politics, Slider