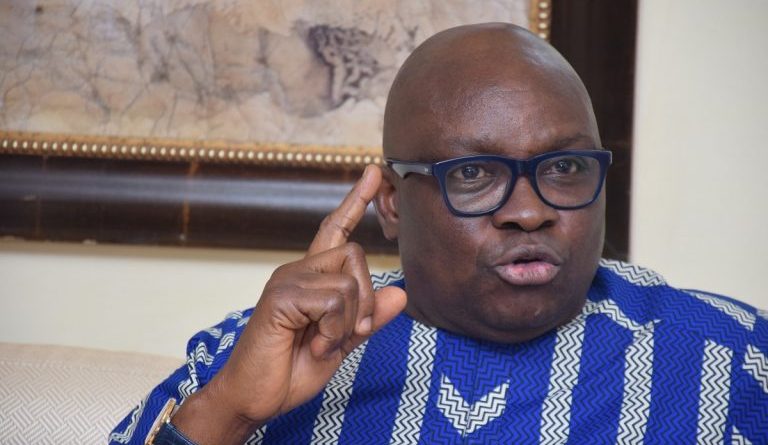 By our correspondent in Ado Ekiti

Deputy Inspector General of Police (DIG) Operations, Mr. Habilal Joshak, has explained the reason behind the sealing off of the campaign venue organised by Governor Ayo Fayose to drum up support for Peoples Democratic Party (PDP) candidate, Prof. Kolapo Olusola Eleka from where they planed to stage what they called: ‘Victory walk’ round a part of the capital city in anticipation of victory in the July 14 poll in the state.

Joshak explained that the police carried the action due to approval for the event was not secured by the party from the police adding that the police would not undermine the governor and any citizen of the state but that approval must be taken before any political rally could hold.

Joshak, who addressed newsmen on the conduct of the force in the forthcoming poll at the police headquarters, also declared that the security details of Important Personalities in Ekiti will be withdrawn on Saturday to add to the credibility of the Ekiti governorship election holding on that da.

“But we are not going to allow any authorized rally that can trigger violence in the state. You can see that the state is tensed up.

“As law enforcement agents, we must be proactive and take actions that can prevent crisis rather than trying to quell it after it might have broken out”, he said.

The police boss added that  no  party will be allowed to hold any political rally not approved by the police until the election is held.

Joshak  said he will work with one Assistant Inspector General of Police(AIG), Mr. H.H. Karma and three other Commissioners of Police; Ali Janga , J.B. Kokumo and G.B. Umar , who will man each of the senatorial districts in the state.

Joshak  said they have contacted security details of Governor Fayose and the candidate of the All Progressives Congress(APC), Dr Kayode Fayemi and other top government officials to report at 6am at the police headquarters in Ado Ekiti on Saturday.

“We won’t allow anybody to go to the polling booth with armed men, this is a breach of the Electoral Act.

“We have contacted them and they have to be here before election commences. This election must not be compromised. They will be documented and whoever defies this will be sanctioned, because they have been contacted”, he warned.

Joshak urged his men not to work for any political party, saying any police officer found exhibiting such will have himself to blame.

“Those who want to create posts where votes are going to be bought will be disappointed. We are not going to  allow it.

“If you cast your votes, you can keep a distance and protect your votes, but if you snatch the ballot box,  we will cut off your hands, if you run with it, we will stop your legs.

“If you come out with masquerade on the day of election, we will get  it arrested and unmask the man behind it.

“My men will be civil, so people are free to come out to vote. Nobody will be harassed, that is not part of our duties.

“Our duty is to secure not only the electoral materials but all the citizens. We are going to be professional and watchful, because we don’t want to be bedeviled with cases of hooliganism, ballot snatching and hate speeches before, during and after this election”, he said.

He said the government house has not been blocked, clarifying that the policemen only blocked the road from Fajuyi to the State Secretariat.

A rally scheduled to take place at the new Pavilion located at Fajuyi, which was within the vicinity of the government house was botched as policemen teargassed the participants .

As at the time of filing this report, no human and vehicular movement was allowed from the Fajuyi end into the government house.

The PDP members had massed at the new pavilion when policemen swopped on them and dispersed them.

Those affected fled in different directions to prevent being arrested by police.

A close aide to governor Fayose called Abiola Omolade was arrested at Fajuyi area and he is now being detained at the Criminal Investigation Department (CID) section at the police headquarters in Ado Ekiti.

Journalists sighted him as he was being dragged by the police to the CID section.

The dispersed PDP members, who escaped into the government house were said to have been trailed by policemen and chased out.

Meanwhile, Governor Fayose was said to have been teargassed by the police while trying to stop the police from dispersing the rally in Ado Ekiti.

The Deputy Governor who doubled as the PDP candidate for Saturday poll Eleka said : I as I speak with you now,  Governor Fayose is unconscious”

Eleka alleged further “Fayose was slapped by the police, it was an assassination attempt on the governor”.

Fayose who later appeared on a neck brace to speak with his people who had gathered in government House, Ado Ekiti said “It was an attempt to assassinate me, I  was slapped by a policeman who kicked me and shouted at me, but I want you to be strong and be of great courage, do not be discouraged, this battle must be won.

“They have come to occupy our land, this is not our democracy. I pray that they will not cause 1883 in Ekiti. I call on the international communities and relevant agencies, Ekiti is under seige. How can l  be a governor of Ekiti state and be manhandled like this?

“I will go back to the hospital and rest. Be resolute stand with PDP and Eleka. I am having a lot of pains but I prefer to bear this pain because of you.

I call on the international communities,  Nigeria and  Ekiti are in trouble, they have arrested many PDP members, put them in chains and locked them away.

Come and rescue Ekiti State. We are the majority, we are the party to beat. They said they have the instruction to kill me or the candidate of the party but they will fail. The Inspector General of Police should be held responsible. Sob…sob…sob…”