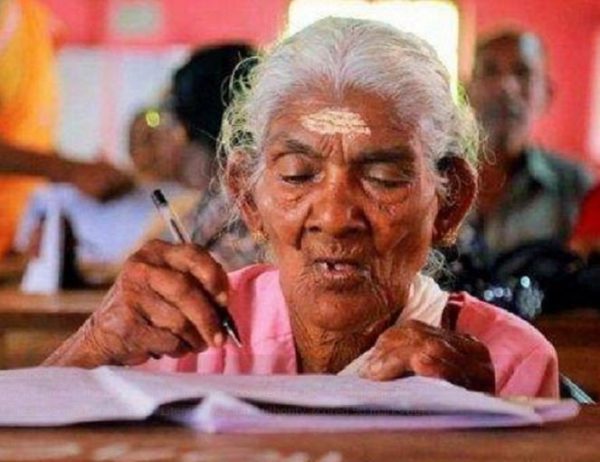 A 96-year-old Indian woman has set a record by scoring 98 marks out of 100 in the literacy exam in Southern State of Kerala, officials said.

The Kerala State literacy mission conducts equivalency examination in different grades for people who could not get proper schooling.

After the results were declared on Wednesday, Karthyayani Amma was felicitated by Kerala Chief Minister Pinarayi Vijayan on Thursday.

Amma, who hails from Cheeped in Alapuzha district north of Kerala state’s capital Thiruvananthapuram, has never attended any school. She is said to have been inspired by her daughter, who recently finished the literacy mission’s course, local media reported.

“I saw children studying and got inspired. I didn’t study when I should have but I am glad that I am getting the opportunity to do that now,” Amma said.

The literacy test is equivalent of exam for Class 4 and Amma said she looks forward to passing Class 10.

“After this, I want to learn computer too. In my free time I can use the computer, type on the computer,” the nonagenarian told reporters.

Amma was married at the age of 13.

According to local government officials, of the 43,330 students who sat for the exam, Amma was the oldest ever, in the state, to take a literacy test.

The photographs of Amma writing the exam went viral on social media and soon after her exam result came out people took to social networking sites to describe her as a source of inspiration and laud her dedication.

“I had tweeted about this 96-year-old Kerala student when she began her studies. Yesterday she passed her literacy exams! Congratulations Karthyayani Amma!” Congress lawmaker from Thiruvananthapuram Shashi Tharoor tweeted.

Kerala was declared fully literate in 1991, which means attaining 90 percent literacy, as per the UNESCO norms.

As per India’s 2011 census, Kerala has around 1.8 million illiterate. To achieve the goal of 100 percent literacy, the local government initiated a scheme in January to eradicate illiteracy among marginalized communities across the state.