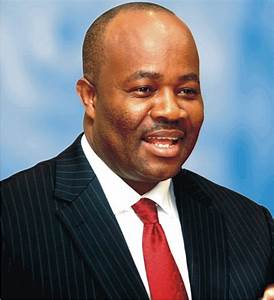 Nigerians are still aghast at the attempt of the minister of Niger Delta Affairs, Senator Godswill Akpabio to use his handpicked 3-man interim management committee to stall the inauguration of the Senate-confirmed Niger Delta Development Commission (NDDC) board. President Muhammadu Buhari sent a list of 16 nominees representing the 9 oil producing states and 3 non- oil producing geopolitical regions to the Senate for screening and confirmation in line with the NDDC Act. The board was eventually confirmed by the Senate on November 7, with a directive by Senate President Ahmed Lawan that it resumes immediately.

But in blatant disregard for the new board, which was confirmed in line with the Act setting up the Commission, Senator Akpabio has refused to dismantle his 3-man illegal interim management committee.

However, new facts indicate that the minister’s action was borne out of a failure to secure the chairmanship or managing director’s position for his nominees in the new Board.


Contrary to claims that the new Board confirmed by the Senate is the handiwork of the APC national chairman Comrade Adams Oshiomhole, Deputy Senate President Senator Ovie Omo Agege and Minister of State for Petroleum Resources Timipre Sylva, Presidency sources say it was arrived at after extensive consultations with stakeholders in the Niger Delta and in accordance with the Act setting up the Commission, which prescribes the manner in which the board and management is to be constituted.

All the key political actors from the APC were involved in constituting the list of nominees and Akpabio nominated the two persons on the senate confirmed board from his state, namely the Executive Director Projects, Engr Otobong Ndem; and the State Representative, Mr Victor Antai into the 16-man Board.

The Nation newspaper had earlier reported on Saturday November 16 that the President personally asked Senator Omo Agege to make nominations into the board with the proviso that they must be credible and committed to the development of the region. According to the newspaper, rather than nominate the board single-handedly, Senator Omo Agege reached out to stakeholders across the constituent states, including Akpabio from Akwa Ibom State, Timipre Sylva from Bayelsa State and Comrade Oshiomhole. It was at the meeting of the four top members of the ruling party that the nominations were agreed.

At the meeting it was agreed that the rotational principle enshrined in the Act should be followed and in line with this, Delta State was due to produce both the Chairman and the Managing Director. At this point, it was agreed that even if both positions were due to Delta State, it would be against the spirit of good corporate governance to have both the head of the Board and the Managing Director from the same state. It was agreed by all that  Delta should produce the MD while Edo State takes the Chairmanship position.

Presidency sources say the list of the 16 board members was properly reviewed by the presidency and it was satisfied that credible persons had been nominated to reposition the NDDC. Thereafter, the President forwarded his letter containing the list of 16 nominees to the Senate for confirmation.


However, days before the Senate President, Dr Ahmad Lawan read the President’s letter on the nominees to commence screening, Akpabio had sought to tinker with the list. “Suddenly, he said since he’s the minister he should have half of the board members appointed by him. He said he also wanted the Chairman or MD position, even if this conflicted with the law setting up the Commission. How can Akwa Ibom State which produced the last substantive MD in July 2016 in the person of Nsima Ekere now want to produce the MD again? How can the minister who himself as Akwa Ibom State Governor nominated Bassey Dan-Abia as Chairman in August 2008 and as substantive MD in December 2013 want to nominate another MD or Chairman? His greed surprised stakeholders, for a man who brought no electoral value to the party.”

Reminded that the NDDC is a multi state agency, the minister was obstinate and said he needed his men running the place because, “it is answerable to my ministry.” Presidency sources say the stakeholders were miffed at his reaction and reminded him that the NDDC was under the presidency and was only just moved to the Niger Delta ministry for administrative convenience, not as an appendage of the minister’s fiefdom.

Knowing that he may not be able to negatively manipulate the new 16-man NDDC Board confirmed by the Senate in line with the Act, Akpabio opted to disrupt it by setting up his handpicked illegal 3-man interim management committee.

Nigerians are shocked at Akpabio’s continued disregard for the NDDC Act and want the president to intervene for the new Senate-confirmed board to assume duties, especially considering the heightened agitation by Niger Delta stakeholders who are opposed to the minister’s antics in the management of the agency.