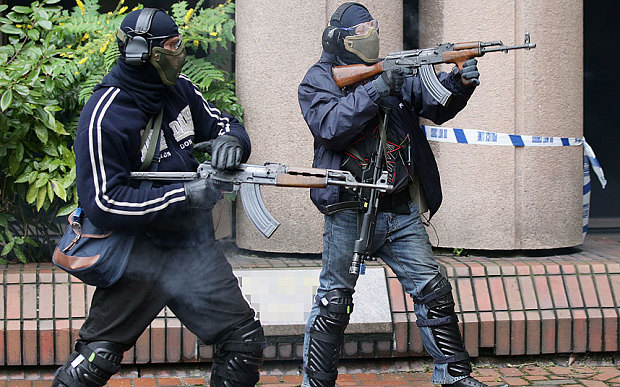 By our Correspondent in Abakaliki.
A seven months old baby identified as Chizaram Nnaluo, was kidnapped at  Aniekwena Street, in Abakaliki on Saturday, May 23, 2020 by hoodlums who invaded the place shooting sporadically into the air to scare people away.
As they succeeded in scaring people away, they rushed into the room where the toddler was lying peacefully and took him, jumped into already packed motorcycle and sped off.
But luck ran out on them when neighbours summoned courage and chased them. Fortunately, the woman who was carrying the baby was left behind.

The seven months old baby was rescued from her, while three of the suspects, Oroke Andrew, Uche Esther and Nwite David were nabbed by the angry neigbours who beat them to stupor and set ablaze the keke the suspects were riding in.

The neighbours were also preparing the suspects as burnt offerings when the police stormed the place to rescued them.

According to the Police public relations officer, DSP Loveth Odah, when the suspects were brought to the station, she interviewed the lady suspect among them who gave more insight on what happened.

“When the DPO of C. Division went there to rescue them, they were half dead and the tricycle was already set ablaze. “So when they brought them, the lady narrated to me that she was kidnapped and kept somewhere for two weeks and that the day of the incident  was their third time of visiting that house to kidnap that particular child.

“I then asked why the focus was on the child alone, she said that the people who planned to kidnap the child said he is the same age with the demand by their business partners.
“It was surprising that the hoodlums went to steal the child with gun. And the child has bruises on one side of her face because of how they forcefully dragged him. ‘”The female suspect said she was kept to serve as the baby’s mother to avoid police suspecting them. That the first day they went to the place, she bought drink and sat in the woman’s shop which has a linking door to their living room and drank it, adding that because people were much there that day they didn’t succeed in stealing the baby.
“She said the woman converted one of their rooms to shop. The lady said it was that day that they wanted to carry the baby but couldn’t. After two attempts and they couldn’t, they decided to come with gun so that they can forcefully carry the baby”, she said.
Odah stated that when neighbours swung into action, the two main suspects escaped while the innocent Keke operator and ‘Okada’ rider were the ones caught with the lady suspect and were almost lynched by the angry mob.
“The most painful part is that the main suspects escaped. They stopped a tricycle pointing gun at his head and ordered him to take them to where they were going to. Again,they saw an ‘okada man’ and stopped him as well, collected his bike and forced him to seat with the lady inside the keke.
“The lady said the two men who were caught were innocent.
The PPRO however assured that efforts were on to arrest the fleeing suspects, while the seven months old baby was given back to its parents.