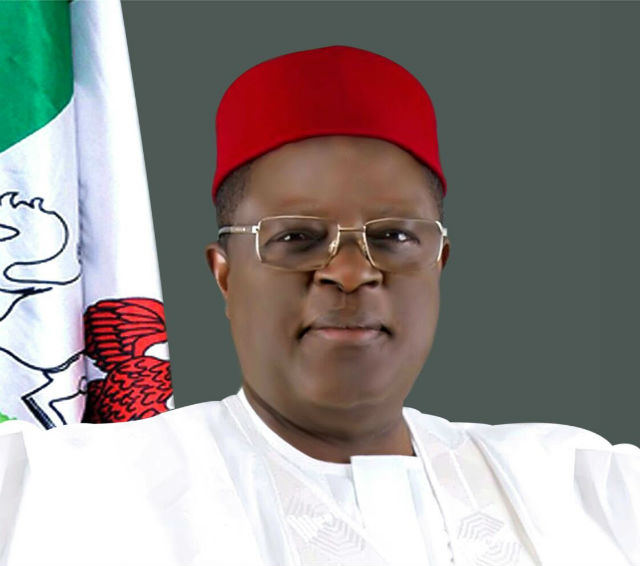 By our Correspondent.
A Federal High Court sitting in Owerri, Imo State capital has restrained the Ebonyi State governor, David Umahi and the N2billion Agric. Loan Probe Panel set up by the state government from probing the former Secretary to the State Government, Prof Bernard Odoh.
This followed an ex-parte motion filed by Prof. Odoh against the governor and the seven members of the panel of inquiry.
Also joined in the suit as first respondent is the Economic and Financial Crimes Commission (EFCC).
Odoh is asking the court to mandate the anti graft agency to probe Mr Umahi and others named in a petition he wrote alleging financial crimes relating to the 2016 Agric loan borrowed from the Central Bank of Nigeria by the State government.
Mr Umahi of recent has been engaged in a media war with Prof. Odoh who was his former SSG in his first tenure. Prof. Odoh had resigned his appointment in 2018 citing certain irreconcilable differences between him and the governor.
Last month, he wrote an open later to Umahi where he criticised certain policies of the government under the governor.
Incensed by Odoh’s criticism, Umahi fired back in a live broadcast wherein he accused Prof. Odoh of misappropriation of the N2billion Agric loan the state government borrowed in 2016.
He also instituted a panel of inquiry to probe the loan disbursement.
But Odoh, who was the Chairman of an Executive Council Committee that provided guidance for the loan disbursement, denied the allegations.
In a counter statement, Prof. Odoh noted that he never handled the financial aspect of the loan disbursement.
He also accused the governor and some of the cabinet members of being responsible for the misappropriation of the funds.
Odoh also rejected the panel of inquiry, which he claimed was made up of appointees and cronies of Governor Umahi. He accused the panel of bias alleging that it was set up primarily to cook up indictment against him.
He therefore petitioned the EFCC urging the anti graft agency to carry out an in-depth forensic investigation into the loan management and disbursement.
Not done, Prof. Odoh filed a suit at the Federal High Court, Owerri Division urging the court to mandate the EFCC to probe the loan disbursement.
He followed it up with a motion ex parte seeking to restrain Umahi from probing him.
The motion in Suit no: FHC/OW/CS/54/2020 was filed on June 1 this year.
It has the EFCC and Ebonyi State governor as first and second respondents respectively.
Others joined in the suit include: Hon Justice Chris Eze, chairman of the panel, Mr Emeka Nwode, Secretary of the probe panel and Bishop Onyeuwaoma Umoke, member.
Others are: HRH Raymond Iyioku, Egenti Okwuegbu, Monday Ikpor and Austin Iowo, all members of the panel of inquiry.
Prof. Odoh had prayed the court to grant him leave to bring application for Judicial Review (Order of Mandamus) compelling the EFCC to carry out its statutory duty as stipulated in the EFCC Establishment Act by investigating the governor and any other persons involved in his petition on the financial crimes relating to the N2billion CBN agric loan.
The professor also sought for a restraining order against the governor and members of the panel of inquiry from probing him pending the hearing and determination of the application.
After listening to the plaintiff’s (Odoh) Counsel, Justice Tijjani Garba Ringim of the Federal High Court, Owerri granted the reliefs sought.
“That leave of this honourable Court is granted to the applicant to bring application for Judicial Review (Order of Mandamus) compelling the 1st respondent (EFCC) to carry out its statutory duties as provided for under sections 1(2) and 6 (b) (h) of the Economic and Financial Crimes Commission (Establishment) Act 2004, by investigating the applicant, 2nd respondent (Ebonyi governor) and any other persons involved in the petition of the applicant on the financial crimes relating to the 2016 N2billion Central Bank of Nigeria Agric loan for Ebonyi State”.
“That the leave granted to the applicant to bring application for Judicial Review (Order of Mandamus) shall operate as a stay of all proceedings and restraining the 2nd, 3rd, 4th, 5th, 6th, 7th and 8th defendants from either by themselves or through their agents or staff or workmen or cohorts from inviting or summoning the plaintiff for purpose of investigating and/or sitting in determination of the misappropriation of the 2016 N2b Central Bank of Nigeria Agricultural loan fund for Ebonyi State or any other relating to same or inviting or summoning the plaintiff for any other purpose whatsoever pending the determination of the application or originating summons”, Justice Ringim ordered.