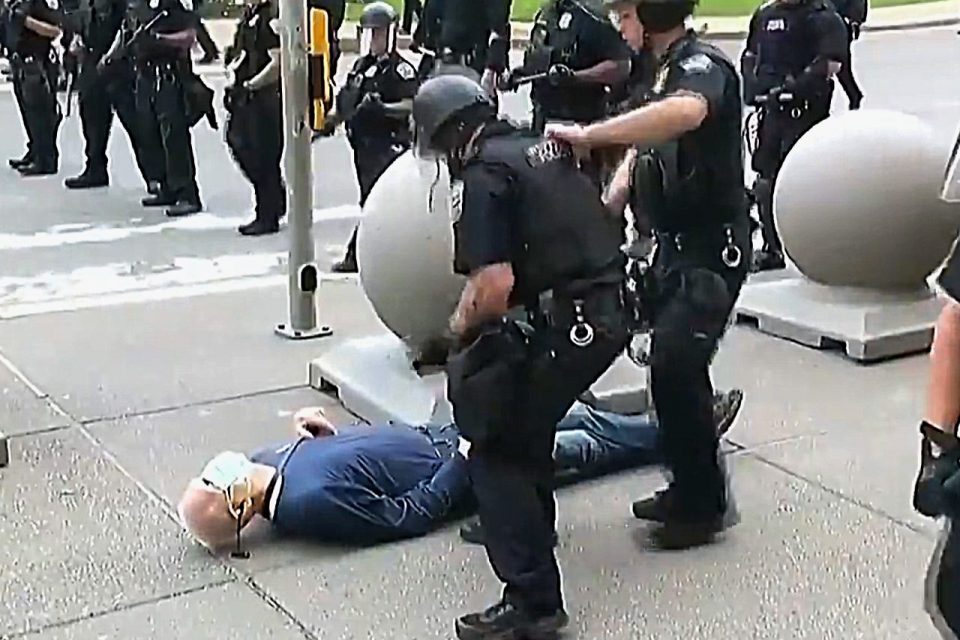 Sourced by The Advocate News.

An entire unit of the Buffalo Police Department resigned from their assignments Friday after two officers were suspended amid outcry over video showing officers shoving a 75-year-old man to the ground, according to the Buffalo News and other media outlets.

Attorney Kelly V. Zarcone issued a statement from Martin Gugino, the man who was pushed to the ground, saying Gugino is “a longtime peaceful protester, human rights advocate, and overall fan of the US Constitution.”

Gugino is in “serious but stable condition. He is alert and oriented,” Zarcone said in the emailed statement. He requests privacy and that future protests remain peaceful.

Graphic video from WBFO shows the two officers pushing Gugino down as he approached them in a public square around an 8 p.m. curfew Thursday. Gugino stumbles back and falls, and the video shows him motionless and bleeding from his head.

“Our position is these officers were simply following orders from Deputy Police Commissioner Joseph Gramaglia to clear the square,” said Buffalo Police Benevolent Association President John Evans. “It doesn’t specify clear the square of men, 50 and under or 15 to 40. They were simply doing their job. I don’t know how much contact was made. He did slip in my estimation. He fell backwards.”

Asked about the resigning officers at a press conference that afternoon, Erie County Executive Mark Poloncarz said he would be “disappointed” if they had in fact resigned.

“If they resigned, I’m exceptionally disappointed by it because it indicates to me that they did not see anything wrong with the actions last night,” Poloncarz said.

The Erie County District Attorney’s Office tweeted Friday that it was continuing its investigation of the incident and that the man was unable to provide a statement to investigators Thursday night.

The officer’s actions quickly drew condemnation from around the state, including Gov. Andrew Cuomo who said the “incident is wholly unjustified and utterly disgraceful.”

During a press briefing Friday, Cuomo played video of the incident, watching it wide-eyed before questioning the officers’ actions.

“You see that video and it disturbs your basic sense of decency and humanity,” Cuomo said.

Cuomo also urged the mayor and district attorney in Buffalo to investigate the incident and move expeditiously towards potentially bringing criminal charges against and firing the officers involved.

Cuomo highlighted the incidents before pushing a police reform agenda being considered in the state legislature.

U.S. Senator, Charles Schumer called for an investigation, according to a statement reported by WIVB-TV.

“The casual cruelty demonstrated by Buffalo police officers tonight is gut-wrenching and unacceptable,” John Curr, the Buffalo chapter director for the New York Civil Liberties Union, said in a statement, adding that it should be a “wake-up call” for city leaders to address police violence.

In its initial statement on the incident, the Buffalo Police Department said a person “was injured when he tripped & fell,” WIVB-TV reported. A later statement posted on the department’s Facebook page said two officers had been suspended without pay and an internal affairs investigation was underway.

Mayor Byron Brown said in a statement that he and the city’s police commissioner were “deeply disturbed by the video.” Brown also confirmed the officers’ suspension and internal affairs investigation.

“After days of peaceful protests and several meetings between myself, police leadership and members of the community, tonight’s event is disheartening,” Brown said.

Brown released a statement Friday saying that the city was aware of “developments related to the work assignments of certain members of the Buffalo police force.”

Five protesters were arrested for disorderly conduct, according to NBC affiliate of WGRZ-TV. None of the police officers seen in the video has been criminally charged.

The Buffalo Police Department and the New York State Police did not immediately respond to USA TODAY’s requests for comment on Thursday.

“I can assure you, Martin is a peaceable person,” said Vicki Ross, executive director of Western New York Peace Center and Latin American Solidarity Committee, an organization Gugino was involved with.

“There is no way that he was doing anything to accost or hurt. He made a judgment to stay out after the curfew because he feels that our civil liberties are so in danger, which they most certainly are.”

Ross said Gugino has been undergoing chemotherapy for cancer.

The incident comes after more than a week of protests against police brutality following George Floyd’s death in Minneapolis. Floyd, who is black, died after now-fired police officer, who is white, pressed his knee into Floyd’s neck for nearly nine minutes as other officers stood by.

Since Floyd’s death, which has been ruled a homicide, protesters nationwide have decried police brutality and racial inequality. Some protests have been marred by violence and looting, and police have been caught on camera multiple times using force against protesters – including peaceful ones.