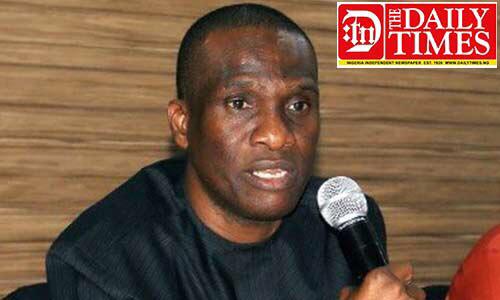 Daily Times Nigeria Limited, the new brand of the old Daily Times of Nigeria Plc, acquired from the Federal Government of Nigeria in 2004 under President Olusegun Obasanjo by Folio Communications Limited, owners of the new publishing outfit, is set to return to prominence in the Nigeria media industry with the constitution of a new board of directors after the resignation of the chairman and chief executive officer (CEO) of the conglomerate company, Mr. Fidelis Anosike.

The media company is almost losing its popularity with the reading public that stuck to it in the past due to some in-explainable operational issues resulting to poor outing and visible impact in the society.

In a statement issued in Lagos and signed by Anosike himself, he said that he made the decision on Sunday, June 7, 2020 when he unveiled the new board members of the media house.

Anosike, who explained that Folio Communications Ltd. is a conglomerate he established at a young age of 24 after graduating from the University of Benin, where he studied Creative Arts, revealed that other companies under the conglomerate are: Folio Nigeria, powered by CNN, Daily Times Nigeria, Miss Nigeria, First October, Times Multimedia and Creative Africa Xchange (CAX).
He said: “I’m proud to announce my stepping down as the chairman and CEO of Folio Communications Ltd, a company I founded straight out of University of Benin at 24.
“We have nurtured this company to acquire Daily Times Nigeria, Miss Nigeria, First October, Folio Nigeria, Times Multimedia, and CAX.
“I am very proud of what we were able to achieve which should be an inspiration for our young people.’’
On the new board of directors he constituted, Anosike revealed their names and portfolios to include: Mr Sam Worlu, former Voice of Nigeria (VON) director-general, as the new chairman and Mr Noel Anosike as the executive vice-chairman.

It is not yet clear whether the new board in its reorganisation of the company will address the issue of indebtedness of the media house to its workers, both past and present, who are yet to receive their salary arrears and other emoluments for several months and years particularly those who were disengaged, resigned or left on their own for being owed salaries.

Perhaps the board will be adverting its mind to this teething issue in the sense that focusing on the company’s workforce will be a good way to go in repositioning the media outfit for maximum productivity and improved performance.