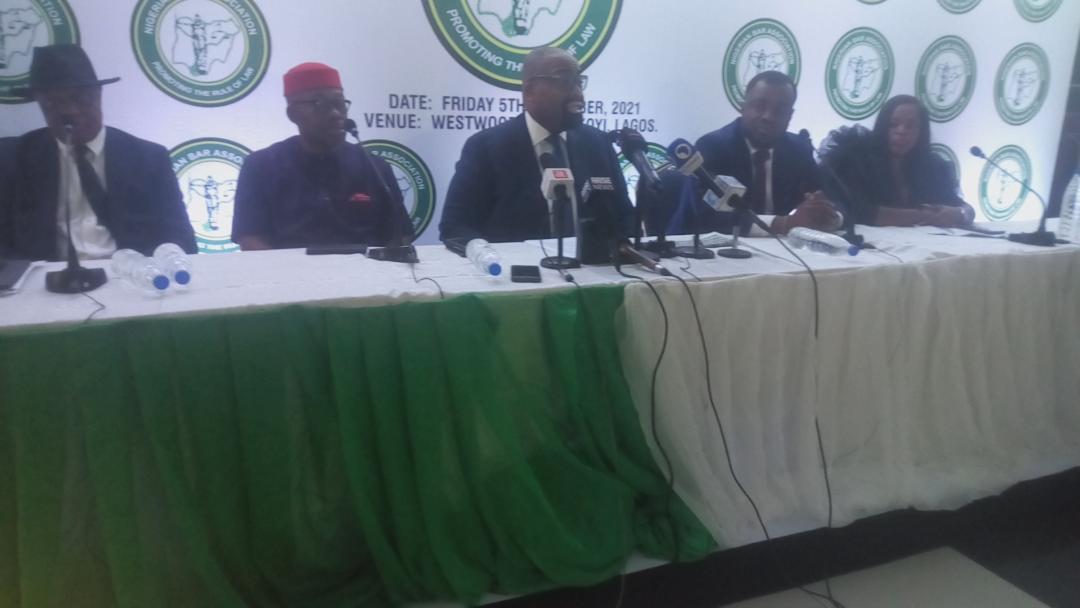 Determined to pursue and end the recurring dastardly and infamous attacks on the nation’s judiciary by the central government, the Nigerian Bar Association (NBA), has urged President Muhammadu Buhari to constitute an independent panel of inquiry to probe the recent invasion of the Abuja residence of Justice Mary Ukaego Peter-Odili, the second highest most senior Justice of the Supreme Court of Nigeria.

The president of the lawyers’ body, Mr. Olumide Akpata, while addressing a press conference over the weekend in high brow area of Ikoyi, Lagos, said the call became necessary owing to a plethora of denials of involvement by relevant authorities of the Federal Government, ditto the Attorney General of the Federation and Minister of Justice, Abubakar Malami (SAN), the Inspector General of Police, Mr. Usman Alkali Baba and the chairman of the Economic and Financial Crimes Commission (EFCC), Mr. Abdulrasheed Bawa, who individually, according Akpata, have distanced themselves from any complicity in the said raid of Justice Peter-Odili’s home on Friday, October 30, 2021.

He recalled that in 2016 similar attacks were orchestrated by the same executive arm of government on senior Justices of the Supreme Court and other judges of Nigeria’s superior courts, which until date no cogent explanations have been offered by government authorities to justify the brazing siege on the judiciary, an unfortunate incident that eventually led to the illegal and forceful removal from office of the then Chief Justice of Nigeria, Justice Walter Onoghen.

Hear him: “In 2016, there was also a Gestapo-like invasion of the residences of some Justices of the Supreme Court and other superior court Justices and Judges by the same security agents of the executive arm of government. Over four years later, the rationale for that raid has never been fully explained or indeed justified”.

On this particular intimidation meted on Justice Peter-Odili and the subsequent denials by government officials that followed afterwards, NBA president said: “This latest incident has not been different. Instead, what has followed has been an orgy of denials by the highest authorities in the land. Firstly, the chairman of the Economic and Financial Crimes Commission (EFCC), Abdulrasheed Bawa on the same night of the raid denied authorising the raid and/or the involvement of the EFCC in the raid. The next day, the Honourable Attorney-General of the Federation under whose office the team that purportedly carried out the raid is allegedly domiciled also denounced the team.

“On Monday, 2nd November 2021 the Inspector General of Police, Usman Alkali Baba speaking through the Force Public Relations Officer, Frank Mba, stated that the “leadership of the Force is not aware and did not at any time order Police operatives to carry out such assignment.” The IGP also ordered detailed investigation into the invasion and pledged that the perpetrators would be made to face the wrath of the law”.

But despite all these denials and the controversy this incident has generated, Mr. Akpata said the NBA by its national executive council, (NEC), the highest decision making organ of the association, has rejected the purported rebuttals of the government and has vowed to vehemently pursue the matter to its logical conclusion by unraveling the perpetrators of this condemnable act no matter how highly placed they are in the society.

“Let me categorically restate that the NBA is thoroughly dissatisfied with the denials emanating from the relevant Government agencies and departments and we have vowed to leave no stone unturned in our bid to unmask all those behind this attack and to bring to justice anyone found culpable, no matter how highly placed”.

He then posed rhetorical questions saying: “If all the relevant Government agencies deny authorising the raid on the premises of a Justice of the Supreme Court, then who authorised the operation? Who took the decision to approach the Magistrate for the search warrant? What if the team had succeeded and any form of harm had befallen His Lordship? Who would have taken responsibility?

“Today it is the residence of Peter-Odili, JSC, who will be the subject of such raid tomorrow? What of potential impact of this raid on the morale and psyche of other judicial officers? Are they truly expected to dispense justice without fear or favour under this dark cloud? Can they go to bed in peace without the fear of being visited by rogue security operatives?

To him, the answers to all the questions are suggestive of the inference that the residence of the second most senior judicial officer in Nigeria was raided by rogue security agencies who acted without authorisation, and for NBA, the grave implications of this possibility leave a lot to be desired.

“It is for this and other reasons that I (Akpata) have appointed the chairman of the NBA Section on Public Interest and Development Law (NBA-SPIDEL), Dr. Monday Ubani to serve as the NBA’s Special Investigator to inter-alia unmask those behind the attack on Justice Odili’s home and to ensure that these individuals are made to face the Law”, he stated.

According to Olumide Akpata, the NBA under his leadership, views the incident as an affront on the Judiciary which grossly undermines the democracy that Nigeria professes to practice; adding that the sting operation by faceless security personnel calls for grave concern as it is undoubtedly an attempt to intimidate the Judiciary and to dissuade “our Judges and Justices from dispensing justice without fear or favour”.

He however regretted that despite the resolve of his administration to rise in defence of the judiciary as he stated in his address delivered at the Supreme Court of Nigeria on Thursday 4th November 2021 on the solemn occasion of the valedictory court session held in honour of the late Honourable Justice Samuel Chukwudumebi Oseji, some individuals and groups within the NBA are not allowing his regime to maintain concerted efforts in tackling the issue, instead they have continued in their discordant approaches by issuing statements as if they are acting on behalf of the umbrella body.

To such groups he has these words of advice and caution: “I have deprecated the discordant voices emanating from groups within the Association in respect of the same issue. Apart from the Annual General Meeting of the NBA which exercises the supreme authority of the Association, the NBA National Executive Council is the highest decision-making body in the Association and when the NBA has clearly articulated a position on any matter, especially a serious one such as the invasion of the premises of a Supreme Court Justice, other groups within the Association, whether they be a body of senior or junior advocates, must rein themselves in and should refrain from muddying the waters by embarking on needless road-shows and issuing statements that only serve to portray our Association, and indeed our approach to the issue at hand, as uncoordinated and ultimately ineffective”.

Visibly infuriated by this show of power by the executive and attempts to humiliate the judiciary, Mr. Akpata revealed that the NBA National Executive Council has mapped out practical plans to take to ensure that this incident is not swept under the carpet or repeated in the future.

The NBA president who noted that the Inspector General of Police, Usman Alkali Baba has ordered a detailed investigation into the invasion and has pledged that the perpetrators would be made to face the wrath of the law, however said the NBA is determined to ensure that it truly happens, adding that even though some of the officers involved have reportedly been arrested, the NBA would not view it as enough efforts to end the constant siege on judges.

He makes further demand: “We therefore demand that the veil of secrecy behind which those who directed the said officers are hiding must be torn to shreds for them all to also be brought to justice. There should be no sacred cows. The position of the NBA is that public officers must be made to account for whatever they do with their entrusted powers and where there is any appearance of executive lawlessness the NBA will respond with dispatch to demand for justice”.

On why the NBA should also search its fold for lawyers culpable in the incident, Akpata emphatically stated that the NBA would also call out and discipline any of its members who is found to have been part of this despicable attempt to ridicule the Judiciary.

Regarding the suspicion raised by NBA NEC against the Attorney General, Malami, (SAN) over the matter, Akpata opined that in order not to breach the rule of natural justice especially the rule against being a judge in one’s own cause, the NBA would be insisting that he be investigated by President Buhari’s own independent Panel of Inquiry.

In conclusion, he stated that the NBA National Executive Council also beamed its searchlight on Magistrate Emmanuel A. Iyanna who issued the said search warrant and was not satisfied with the ‘volte-face’ by His Worship.

Consequently, the NBA NEC therefore resolved to initiate a formal petition for misconduct against the Magistrate to the FCT Judicial Service Committee to serve as a deterrent to others.