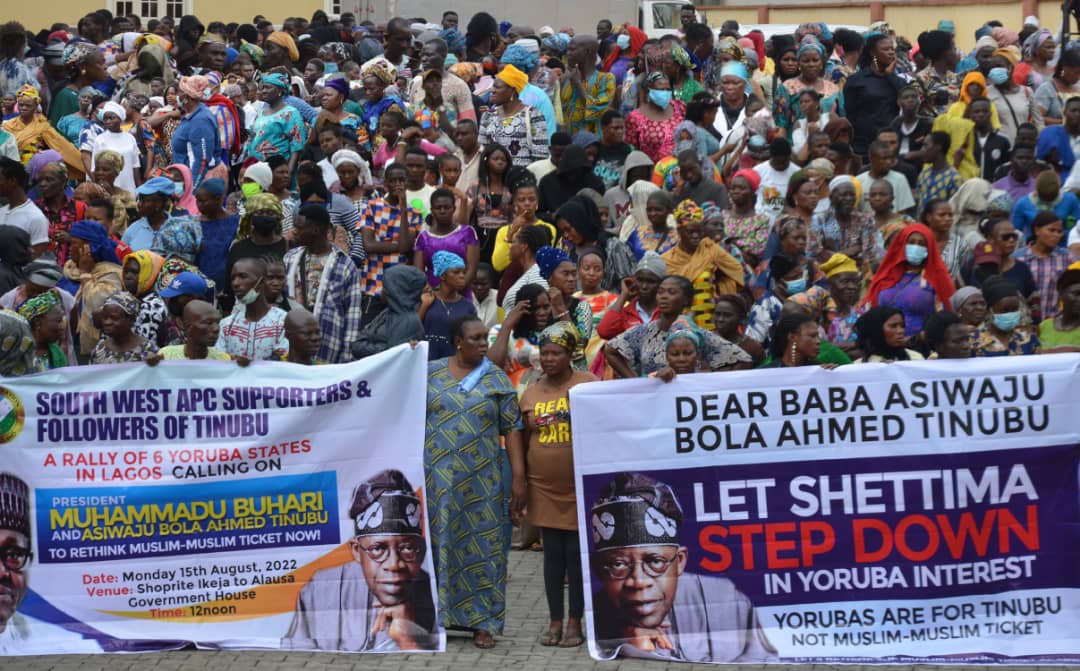 HUNDREDS of stakeholders and party supporters of the ruling All Progressives Congress on Monday took to the streets of Lagos to protest the party’s stance on the contentious Muslim-Muslim ticket.

The demonstrators, under the aegis of the Coalition of APC Stakeholders Network and Southwest Supporters of Tinubu, began their peaceful walk from the popular Shoprite Shopping Mall in Ikeja to the State House in the Central Business District area of Alausa.

Chanting solidarity songs, the protesters walked through the heavy traffic created by the demonstration while displaying several banners that read ‘Dear Baba Asiwaju, Let Shettima Step Down in Yoruba Interest’, ‘President Buhari and Tinubu should rethink Muslim-Muslim ticket’, and ‘Tinubu, replace Shettima with Christian VP to balance the ticket.’

The development is coming barely one month after a similar protest rocked the APC secretariat in Abuja.

Hundreds of demonstrators had stormed the national secretariat of the All Progressives Congress to register their grievance over the position of the party on the contentious Muslim-Muslim ticket.

The protest took place almost at the same time the leadership of the APC was unveiling former Governor of Borno State, Senator Kashim Shettima, as the running mate of its Presidential Candidate, Asiwaju Bola Tinubu, at Shehu Musa Yar’Adua in Abuja.

The demonstration, which was led by a few party members under the aegis of APC Hausa-Fulani Youth Forum, saw the delegation arrive at the Secretariat in six luxury buses and a few cars, raising different banners and chanting solidarity songs.

Some of the banners read ‘A cry for justice’, ‘Drop Shettima and give slot to our Christian brothers’, ‘Discrimination and mutual suspicion in our country’ among others.

Addressing journalists in front of the State House in Alausa, President-General of the group, Elder Samuel Arokoyo, disclosed that the only obstacle between APC Presidential Candidate, Asiwaju Bola Tinubu and the presidency in 2023 is his choice of running mate, Senator Kashim Shettima.

According to him, many of his supporters including those in the South West were shocked that Tinubu opted for a fellow Muslim to become the vice-presidential candidate.

While describing Tinubu as a ‘political colossus and astute political strategist’ who has successfully built an enviable foundation for the party, Arokoyo disclosed that the only way the former Lagos State governor can redeem himself is to replace Shettima with a Christian candidate.

He said, “Tinubu has been crucial in the nation’s democracy being an important figure for almost four decades hence his emergence as APC presidential candidate was perceived as a breadth of fresh air.

“As a multi-religious and multi-ethnic country, any attempt for one religion to dominate the political structure could only widen the gap of mistrust and destroy the delicate sense of tolerance cultivated over the years.

“This is why the choice of Shettima was not only ill-timed but a total disregard for the diversity of the country, crushing the bridges built to connect the religious differences and promote ethnic harmonious co-existence”.

The coalition reiterated that the essence of the peaceful protest was to urge the party’s presidential candidate to drop Shettima for equity and fairness.

Arokoyo stressed that considering a Northern Christian running mate for the ticket could fetch Tinubu close to 70 per cent of Christian votes in the following northern states Kogi, Kwara, Plateau, Nasarawa, Benue, Taraba, Kaduna, Adamawa, Gombe, Borno, and the FCT whose votes can make the difference.

“We want the best for the nation and the Muslim-Muslim ticket isn’t. This will set negative precedents for future generations. We must not fail our children.

“In place of Shettima, Tinubu should pick a Christian from the north-central. Doing so will assure the APC of a higher chance of gathering more votes from the North and across the country.

“The north-central region dominated by Christians played a vital role in the 2015 and 2019 presidential elections. As popular as PMB is in the North, the only times he succeeded were when he won this zone, despite always dominating the Muslim-dominated North West and North East in his previous three attempts.

“Tinubu will write his name in gold should he make this bold decision. He will become the toast of Christians. Imagine the kind of momentum our leader will gather should he get the backing of almost 50 million Christians in Nigeria,” he said.