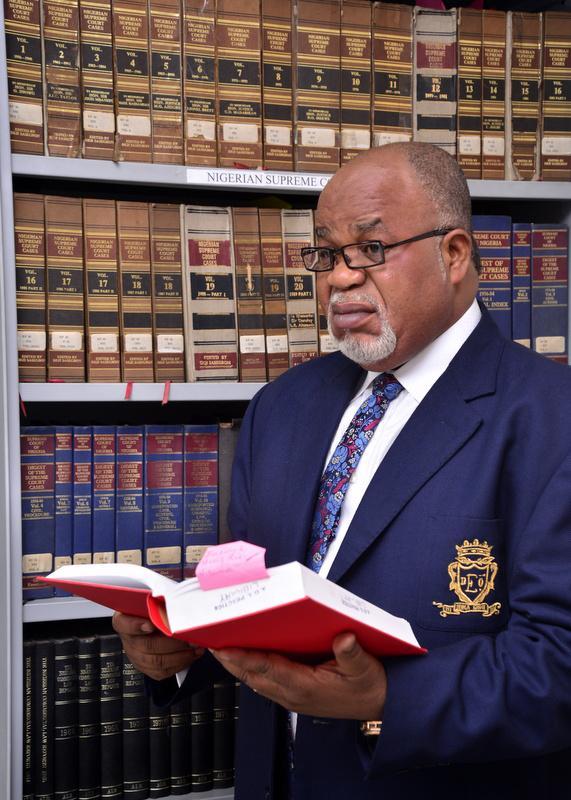 By Advocatenewsng.com
IN the celebrated judgment of the Supreme Court of Nigeria in the case of Chief Emeka Odumegwu Ojukwu v Governor of Lagos State (1986) 1 NWLR, (Part 18), 621 at 636-637, their lordships put the position of the law this way: “The rule is well settled both by the courts of England and of this country, that where a suit is brought to enjoin certain activities…. of which suit the defendant has notice, the hands of the defendant are effectually tied pending a hearing and determination even though no restraining order or preliminary injunction be issued….
“The conclusion to be drawn from the case is that after a defendant has been notified of the pendency of a suit seeking an injunction against him even though a temporary injunction be not granted he acts his peril and subject to the power of the court to restore the status wholly irrespective of the merits as they may be ultimately decided”.

The same position was taken by the apex court in the case of Chief Elias Okeke-Oba vs Ikwuka Okoye (1994) 8 NWLR, (364) 605 at 617, where it thus stated: “The general practice is that an application for an order for interlocutory injunction, all activities affecting the Res…in dispute are automatically terminated as a mark of respect to the court before whom the application is pending”.
Thus, two different orders of a Federal High Court, Lagos given by two different judges of the same court have created a conflict of interest in the parties before it, leading to the lodgement of two separate appeals at the Court of Appeal, Lagos Division and two motions on notice filed at the court in Ikoyi to determine the propriety or otherwise of the law and facts in issue.
Following this development, 24 garnishee commercial banks against which the garnishee order nisi was made in order to stop the judgment debtor from making any withdrawal of funds attached to any of the banks have been forced to put all actions on hold pending the final hearing and determination of the applications.
This matter began in 2020 at a Lagos High Court in suit No. LD/4123/CMW/2020 brought by the applicant/judgment creditor, Chief Anthony Ajibola Aribisala, SAN, against Asset Management Corporation of Nigeria, (AMCON) to recover N1,014,701,905.52 (One billion, fourteen million, seven hundred and one thousand, nine hundred and five naira, fifty kobo.) owed him by the Corporation.
On October 17, 2022, the judgment creditor secured judgment in the matter in his favour. On the strength of that, he proceeded to the Federal High Court on October 21, 2022 to register the judgment as the judgment of the court with suit No. FHC/L/NRJ/9/22: Chief Anthony Ajibola Aribisala, SAN v AMCON.
Flowing from this registration, on November 4, 2022, the Federal High Court, Lagos sitting before Justice Akintayo Aluko made a garnishee order nisi attaching the funds of AMCON in the custody of 24 commercial banks operating in Nigeria.
After this garnishee order nisi was made on November 4, Justice Aluko fixed a return date for the matter to December 8, 2022 for report of progress.
But the judgment debtor/respondent, AMCON went behind the applicant/judgment creditor, Chief Aribisala, SAN, and petitioned the Administrative Judge in Lagos, Justice Ayokunle Faji seeking a transfer of the case file to another judge before the return date.
Unfortunately, the Admin Judge was away on official assignment and it was the next most senior judge deputizing for him (I.e., Hon. Justice Ambrose L. Alagoa) that dealt with the Judgment Debtor’s application to re-assign the case file to another Judge.
Subsequently, without serving notice of the transfer to the applicant/judgment creditor for fair hearing in line with the rule of court, AMCON succeeded in having the matter transferred from Justice Aluko to Justice T.G. Ringim, who is known for sitting over AMCON matters at the court.
When the applicant got wind of the transfer, he rushed to the court and asked the new judge to give him a short date to file his reply to the transfer letter. He protested against the secret letter of transfer and urged Justice Ringim not to assume jurisdiction over the matter his brother judge from the same court and the same division is handling.

But in a Bench ruling by Justice Ringim on that day, he ignored the submission made by the judgment creditor’s counsel, Mr. Tayo Oyetibo, SAN, assumed jurisdiction over the matter and there and then fixed the next day to give his verdict on the suit.
On November 18, 2022 the Federal High Court sitting before Justice T.G. Ringim, made an order setting aside the garnishee order nisi made by Justice Aluko on November 4, 2022.
Dissatisfied by this order per Ringim J., the judgment creditor, through his lead lawyer, Mr. Oyetibo, SAN, on the same date filed and lodged an appeal at the Court of Appeal, Lagos Division.
In the appeal the appellant/judgment creditor is praying the court in between to set aside the order made by Justice Ringim on November 18, 2022 and allow his appeal to succeed on the ground that the lower court erred in law in setting aside the garnishee order nisi made on November 4, 2022 by Justice Akintayo Aluko on the basis of the application of the judgment debtor filed on November 9, 2022.
On the same 18th November, 2022 the judgment creditor, through his counsel, Oyetibo, SAN, lodged another appeal at the appellate court, Lagos to set aside the Bench ruling per Ringim J, delivered on November 17, 2022 in which he assumed jurisdiction to hear the matter that was before his brother judge, Justice Aluko.
Earlier on November 15, 2022, the applicant filed a motion on notice at the Federal High Court seeking for three orders (a) setting aside the letter of transfer to the Administrative Judge dated November 11, 2022, (b) order setting aside the transfer of the suit from Aluko J, to Ringim j, and (c) an order seeking for the return of the case file to the first judge per Aluko J, for the continuation of the matter.
In order to ensure that the Res is not tampered with by the judgment debtor and the garnishee banks pending the hearing and determination of all the motions and appeals before the courts, the judgment creditor caused his counsel, Oyetibo SAN, to file an application on November 18, 2022 seeking for an order restraining the 24 garnishee banks from releasing to AMCON any part of the monies attached by the garnishee order nisi made by Aluko J, pending the hearing and final determination of the appeal filed to set aside the order made by Ringim J, on November 18, 2022.
The same application sought for another order restraining AMCON from withdrawing or otherwise dealing in any manner whatsoever with any part of the monies in the hands of the garnishee banks attached with the garnishee order nisi made by Aluko J, on November 4, 2022 until final determination of the appeal lodged against the order made by Ringim J, on November 18, 2022 setting aside the order per Aluko J.
To drum this message home, particularly to the garnishee banks, the judgment creditor through his lawyer also sent a powerful letter to all the garnishee banks having custody and control of the monies belonging to the judgment debtor, AMCON, to call their attention to the pendency of all the motions and appeals before the courts in relation to the matter in order not to run foul of the law.
These letters alongside the motion papers and the appeal processes have already been made public through two separate advertorials published in the Punch Newspaper of November 23, 2022 and ThisDay Newspaper of November 24, 2022 respectively.