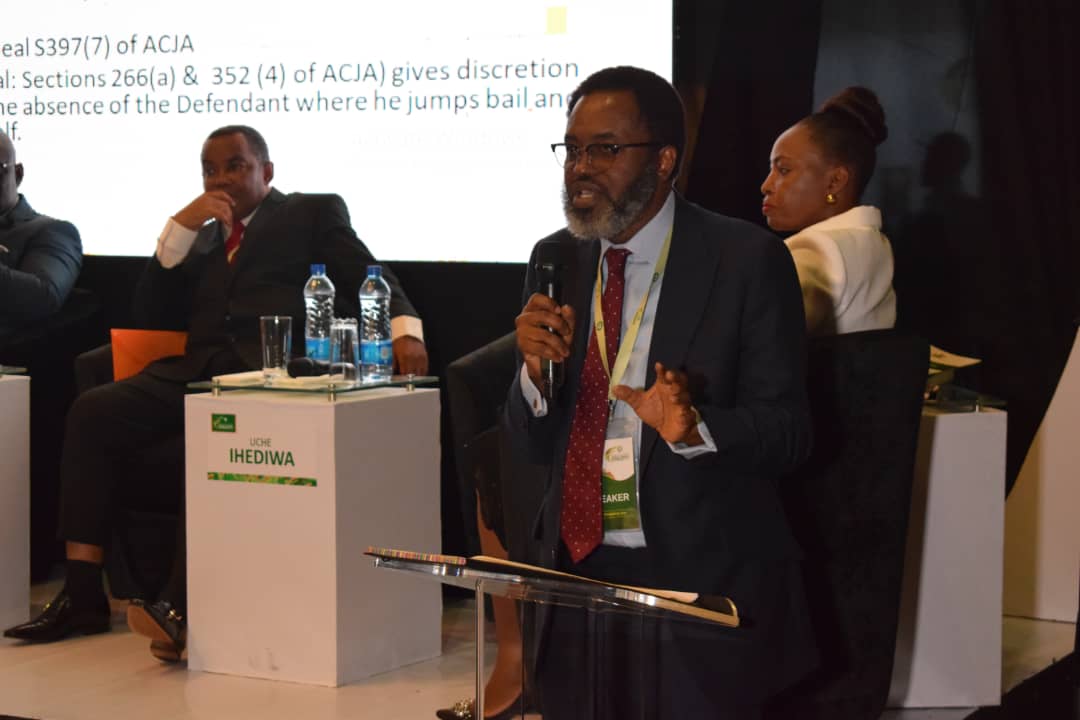 Lagos AG, Onigbanjo (SAN), addressing the audience at the Show-case session on Wednesday.


Lagos State Attorney General and Commissioner for Justice, Mr. Moyo Onigbanjo (SAN), has hinted that the state government is set to proffer a 21st century solution to tackle the challenges of overpopulation which is facing the state at the moment.

According to him the available resources of the state cannot meet with the needs of the increasing population growth of the state.
The newly inaugurated AG declared this at the Lagos State Showcase session at the 59th annual general conference of the Nigerian Bar Association (NBA), on Wednesday, August 28, 2019, at Eko Hotels and Suites, adding that Lagos is the 5th largest economy in Africa and the most populated state in Nigeria, but fortunately, the most preferred destination in the continent as it experiences 89 people migrating into it every hour.

The Attorney-General noted that the Lagos  Showcase session of the conference is aimed at proffering solutions to the population needs of the state that cuts across the six different sectors to include: Transport, Health, Education, Environment among others, which is the policy direction of Governor Sanwo-Olu’s administration in Lagos State.

While stating the challenges of the environment sector as a result of the huge population of the state, the Commissioner for Environment and Water Resources, Mr. Tunji Bello noted that bad drainage system remains the major causes for flooding, saying  there is need for citizens to engage in regular cleaning of their drainage.
He added that waste products used should be well sorted in homes before recycling by the Lagos State Waste Management Authority (LAWMA) in the state, noting that this will ease their work and also ensure a healthy environment for Lagosians.

“There will be commencement of waste sorting using model estates in the state and this will lead to waste conversion, waste buyback and minimization at landfill”, he informed. Mr.

Bello further advised that climate change education should be inculcated into the education curriculum from the primary to tertiary levels.

Likewise, the Commissioner for Transportation, Mr. Federick Abimbola, noted that challenges faced in the transportation sector affects the economic development of the State and the activities of the people.

The Commissioner, however, informed that strategies are in place to address the challenges of transportation in the state.

“The initiative will see to the completion of the Blue and Red lines for Mass transport movement of the citizens, reducing traffic congestion by fixing potholes, establishing corps traffic marshals and the deployment of technology to enhance traffic management and enforcement”, he added.

While applauding the proposed initiative of the Governor Sanwo-Olu led-administration on traffic and transportation, Mr. Abimbola said that it will help reduce delays and improve the time spent commuting within the state.

The Showcase at the NBA conference featured over 15 members of the State Executive Council and the event was attended by huge number of conference delegates.