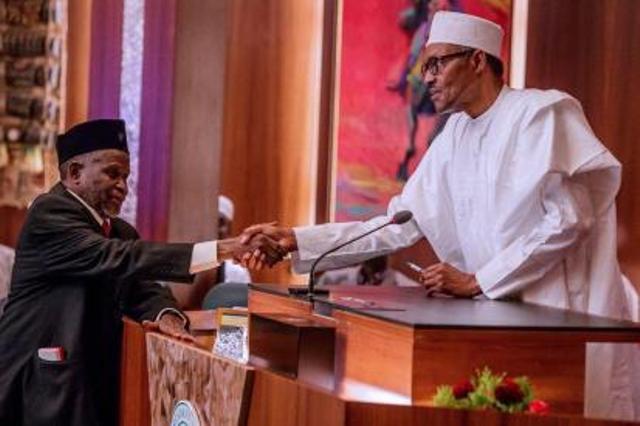 President Muhammadu Buhari with the acting CJN, Ibrahim Tanko Mohammed after being sworn in at the State House, Abuja.

President Muhammadu Buhari yesterday suspended the Nigerian Constitution and acted arbitrarily when he dictatorially sworn in a new acting Chief Justice of Nigeria, Tanko Mohammed after suspending the sitting CJN, Walter Samuel Nkanu Onnoghen on a flimsy excuse that he acted on the order of the Code of Conduct Tribunal which recommended Onnoghen’s suspension from office.

A superior court of record, the Court of Appeal of Nigeria, had earlier on Thursday this week, stopped the CCT from continuing on the proceedings pending before it over the non-declaration of assets charge brought against the Chief Justice by the Federal Government.

Three other superior courts of coordinate jurisdiction, the Federal High Court, Abuja division, Federal Capital Territory High Court and National Industrial Court of Nigeria had earlier in the week made similar restraining order on the CCT which was ignored as a build-up to the President’s plan to remove Onnoghen yesterday and replace him with his junior in hierarchy, Justice Mohammed.

Speaking at the swearing in of Mohammed on Friday, the President said Onnoghen’s removal was based on a request of the Code of Conduct Tribunal (CCT) dated January 23 which directed him to suspend Onnoghen pending the completion of his trial.

The President said the nation had been gripped by the “tragic realities of no less a personality than the CJN himself becoming the accused person in a corruption trial since details of the petition against him by a civil society organization first became public about a fortnight ago.

Buhari said he was dismayed that the former CJN did not excuse himself from superintending the judicial arm of government after he had admitted that he failed to follow the spirit and letter of the law in declaring his assets.

“Perhaps more worrisome is the Chief Justice of Nigeria’s own written admission to the charges that he indeed failed to follow the spirit and letter of the law in declaring his assets, citing ’’mistake’’ and ’’forgetfulness’’ which are totally unknown to our laws as defences in the circumstances of his case.

“One expected that with his moral authority so wounded, by these serious charges of corruption, more so by his own written admission, Mr. Justice Walter Onnoghen would have acted swiftly to spare our Judicial Arm further disrepute by removing himself from superintending over it while his trial lasted.

“Unfortunately, he has not done so. Instead, the nation has been treated to the sordid spectacle of a judicial game of wits in which the Chief Justice of Nigeria and his legal team have made nonsense of the efforts of the Code of Conduct Tribunal to hear the allegation on merit and conclude the trial as quickly as possible considering the nature of the times in which we live,” he said.

He said in line with the administration’s avowed respect for the rule of law, he have wholeheartedly obeyed the order of the CCT and “hereby suspend the Honourable Justice Onnoghen, GCON as the Chief Justice of Nigeria pending final determination of the case against him at the Code of Conduct Tribunal.

“In further compliance with the same Order of the Code of Conduct Tribunal, I hereby invite Honourable Justice Ibrahim Tanko Mohammed JSC, being the next most Senior Justice in the Supreme Court, to come forward to take the judicial oath as CJN in an acting capacity.”

Mohammed’s swearing was done inside the council chamber of the State House, Abuja after the president signed the new Executive Order 007.
Onnoghen had earlier on Friday announced a plan to swear in members of the various 2019 election petition tribunals on Saturday, January 26.