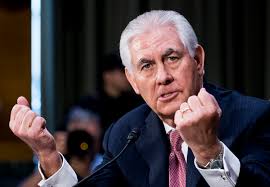 US Secretary of State, Rex Tillerson,  has been sackedy President Donald Trump. Reports said  that Mr. Tillerson was informed of his sack  while meeting with Nigeria`s President Mohammadu Buhari in Abuja.

White House sources were quoted as saying that difference of opinion was the reason for the sack.

Tillerson was immediately replaced with the director of the CIA, Mike Pompeo.

Thanking Mr Tillerson for his service on Twitter, Mr Trump said the new State Secretary would do “a fantastic job”.

Mr Tillerson, a former chief executive of ExxonMobil, was only appointed to the job just over a year ago.

The President also nominated Gina Haspel to become the first woman director of the CIA.