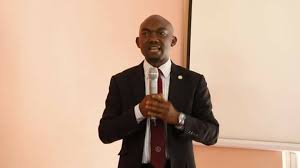 Taiwo Akerele, chief of staff of Governor Godwin Obaseki of Edo State.
Chief of Staff to Governor Godwin Obaseki of Edo state, Mr Taiwo Akerele, has dragged The Guardian Newspapers before a Benin High Court on what he called “general and/or exemplary or aggravated damages for libel.
The case which was filed on his behalf by his twin brother, Kehinde, a legal practitioner relates to a report which the newspaper published earlier in the year with the title: “Probe of alleged diversion of relief materials begins in Edo”.
Recall that at the time of the report, which was published by many other local and national dailies,  4, 781 bags of rice out of the 6,822 ostensibly approved for the Internally Displaced Persons Camp at Uhogwa in Ovia North East Local Government Area of the state by the Federal Government was reported missing thereby generating controversy.
The rice scandal which the state  government  insisted was judiciously disbursed saw the Nigerian Police inviting Chief Dan Orbih, chairman of the Edo State chapter of Peoples Democratic Party, PDP, for questioning after he said the governor must account for the missing bags of rice.
But reacting that, the state government said that  all the bags of rice and other items like shoes, apart from the ones that were damaged in the store before they were allocated, were distributed to the Internally Displaced Persons camp  and other orphanage homes within the state.
According to the media adviser to the governor, Mr Crusoe Osagie, said: “The allegation is laughable and completely false and is a design of detractors to smear the image of a performing government”.
He said: “They have tried and failed on all other fronts, now they have stooped lower to a commodity as cheap as rice.”
However, Akerele in his four paragraph statement of claims before the court is asking it for an order compelling the newspaper to pay him a total sum of N2,250,000 000.
He is asking for N250million as general and exemplary damages for libel and another N2.5million as costs.
In addition, Akerele is asking the court for an order compelling the newspaper and one other to publish a well- worded retraction and apology in a similar conspicuous manner”.
Politics, Slider