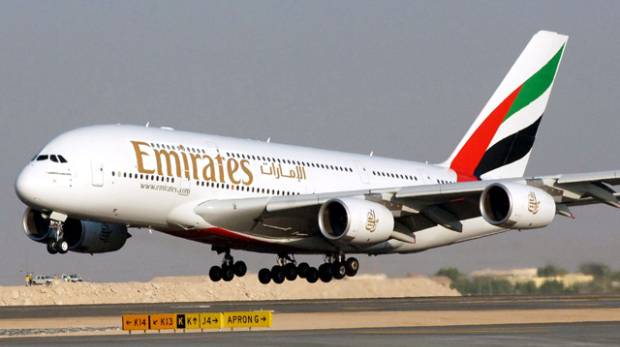 One of the crew members of an Emirates Airlines aircraft due to depart Uganda’s Entebbe International Airport has sustained life-threatening injuries after jumping off the emergency door.

The Flight – EK 730 had just delivered passengers to Entebbe on Wednesday and was preparing to load other passengers for Dubai when the incident happened.

A source at the airport said that the yet-to-be-identified crew member was immediately evacuated and taken to a hospital.

The cause of the incident was not yet clear, but some eyewitnesses cited possible suicide.

She had been seen holding what looked like a glass bottle under her chin before she made the fall.

Africa review reports that witnesses said they had seen her in a verbal exchange with colleagues as they boarded the plane.

Her knees were shattered and body cut with broken glass from a bottle she jumped with,” a witness at the airport said.

In a press statement, Civil Aviation Authority said the crew member “opened the emergency door and unfortunately fell off…” without explaining how.