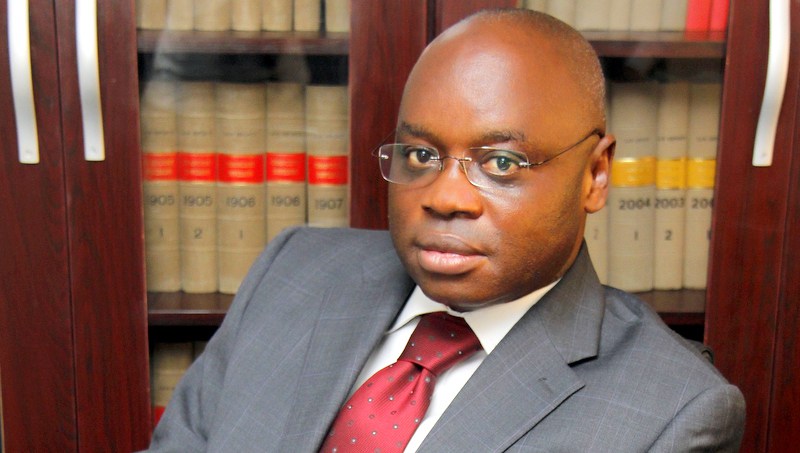 A senior Nigerian lawyer, Dr. Joseph Nwobike, (SAN) who was earlier today convicted for bribery, has been sentenced to one month in prison by Justice Raliat Adebiyi of the Lagos State High Court, Ikeja Division.

Dr. Nwobike was convicted on 12 counts of attempting to pervert the course of justice.

He was sentenced to one month in prison for each of the 12 counts. But because the sentences are to run concurrently, he would spend only a month in prison.

Justice Adebiyi, however, found the lawyer not guilty on offences of offering gratification to a judicial officer and making false declaration to an officer of the Economic and Financial Crimes Commission (EFCC).

In a four-hour judgment, Adebiyi, found the senior lawyer guilty of counts three to 17 of the 18-count charge slammed on him by EFCC.

The judge acquitted him of counts one, two, four, six and 18.

In her judgment, she found the behaviour of Nwobike of “unbecoming of a senior member of the bar”.

“Why does the defendant, a senior member of the bar with juniors and other lawyers have the need to personally liaise with court registrars? The court finds that the prosecution was able to prove beyond reasonable doubt that the defendant perverted the course of justice by sending text messages to court registrars.”

After the judgment was read, Olawale Akoni (SAN), Nwobike’s lawyer, asked the court to temper justice with mercy.

“The fact that the defendant is a first-time offender who has never had any brush with the law before until now,” he said.

“He is a senior member of the bar who has conducted himself appropriately, he has run a law firm which has quite a number of practitioners, he is a family man with aged parents and children.

“Your Lordship, we listened to your judgment carefully and ask that a non-custodial sentence be appropriate. He has a lot to offer and I pray that Your Lordship considers this in deciding the nature of punishment to give. I pray the court to tempers justice with mercy and impose a very heavy slap on the wrist.”

Rotimi Oyedepo, counsel to EFCC, appealed to the judge to impose a two-year jail sentence on the lawyer in order to serve as deterrence to others.

The judge after adjourning for a few minutes to give her sentence, however returned to the courtroom and pronounced her verdict saying the senior lawyer be put behind bar for one month.

Nwobike was first arraigned on a five-count charge on March 9, 2016 but the EFCC later amended the charges on two different occasions, each time leading to the re-arraignment of the SAN.

The last amendment to the charges saw Nwobike re-arraigned on February 8 , after which the lawyers canvassed their final arguments.

In the charges, EFCC claimed that Nwobike offered N750,000 and N300,000 gratifications to Mohammed Yunusa and Hyeladzira Nganjiwa, two judges of the federal high court.

The EFCC alleged that Nwobike offered them the money to pervert the course of justice but the lawyer pleaded not guilty.

Akoni had urged the court to discharge and acquit his client, contending that the EFCC failed to substantiate its allegations against him.

Akoni said contrary to the claim by the EFCC, the N750,000 that Nwobike gave to Yunusa was not a bribe but for the specific purpose of helping the (sick) mother of the judge.

He said all the judgments which the EFCC claimed that Nwobike paid Yunusa to give in his favour were all upheld by the Court of Appeal.