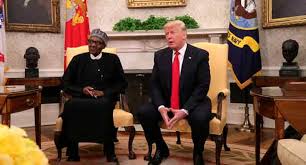 President Trump and President Buhari at the White House today.

President Donald Trump of the United States of America while hosting Nigeria’s President, Muhammadu Buhari on his first day visit to the American leader at the White House, told the Nigerian helmsman that based on reports filtering from his country, America will definitely not accept the killing of Christians in that country in whatever guise.

The American leader said this while playing host to his Nigerian counterpart at the White House on Monday.

“We have heard very serious problems with Christians who are being murdered in Nigeria, we are going to be working on that problem very, very hard because we cannot allow that to happen,” Trump said.

On his part, Buhari said he is working hard to address the problem.

He also thanked the US government for approving the sale of military hardware to Nigeria.

The clash between farmers and herdsmen took a different dimension when gunmen invaded a Catholic church in Benue state last week.

Two priests and 17 worshippers were massacred.

Condemning the attack the Pope prayed for Christians while conducting a mass in Rome on Sunday.

The Christian Association of Nigeria (CAN) had staged a nationwide protest against the killings on Sunday.