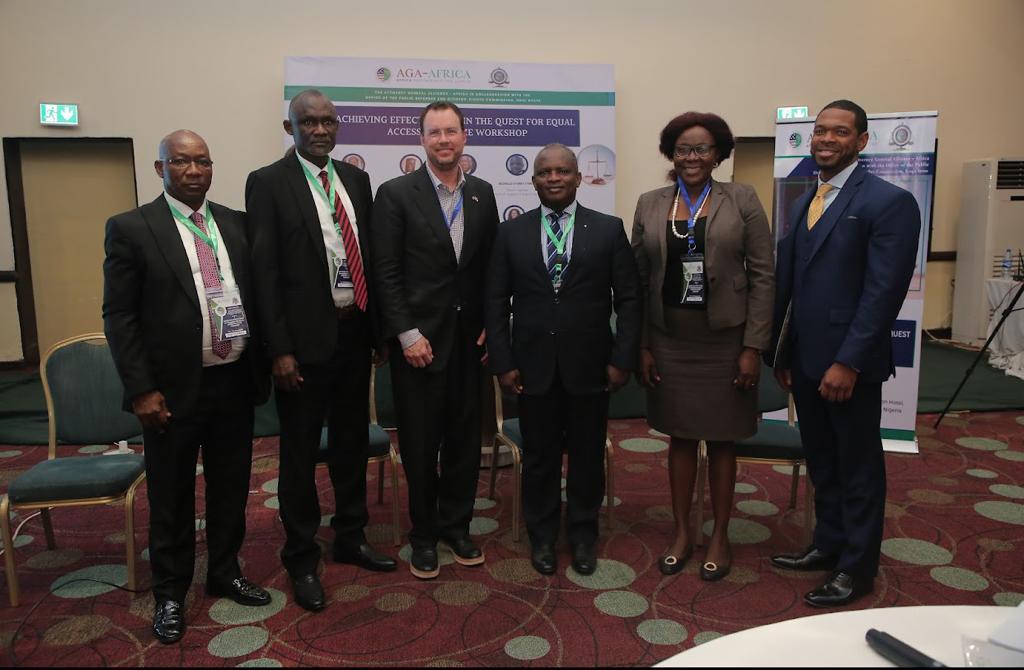 Legal pundits at the two-day workshop on proper funding of the judiciary for equal access to justice held in Abuja…. recently. From left to right: DG of Office of Public Defender, Abdullahi Zakari, DG of Legal Aid Council, Nigeria, Aliyu Bagudu, Prof David Blake, Hon Justice Reginald Fynn of the Court of Appeal, Sierra Leone, Ebelechukwu Enedah and Jason Downs of District of Columbia, USA.
By Executive Editor, Judiciary.
A two-day workshop on achieving effectiveness in the quest for equal access to justice has ended in Abuja with a call to stakeholders and relevant authorities to improve the funding of the judiciary for effective justice delivery in the country.
The workshop, organised by the Attorney General Alliance – Africa in collaboration with the Office of Public Defender and Citizens’ Rights Commission of Kogi State was to train lawyers providing free legal assistance to the vulnerable and indigent citizens in the society.
In his paper, titled, “Funding and administrative issues-effective global trend”, the Chief Deputy Attorney General, Office of the Attorney General for District of Columbia, Jason Downs said when there is proper funding for public defenders, violation of rights by the police and the state against the indigents and the poor will be checked.
He said, it is expensive to incarcerate someone, considering the cost of movement from detention centers to the court, feeding and medical expenses of detainees.
“When fund is adequately provided for public defenders, it will increase efficiency of the country’s judicial system”, he said. He however called for total independence of the judiciary.
The Director General, Office of the Public Defender and Citizens’ Rights Commission, Barrister Abdullahi Zakari, in his remarks said, his commission was set up in 2019 to provide free legal services to those who could not afford the services of lawyers.
Apart from promoting and enforcement of the fundamental human rights of citizens of Kogi State, he said the Commission collaborates with other organisations to train lawyers who provide legal services to poor citizens of the country.
Also speaking, the coordinator of AGA-Africa project, Ebelechukwu Enedah said the essence of the workshop is the reinforcement of the rule of law, through equal access to justice.
“What we are doing with the Commission is to ensure that the less privileged, the poor masses have access to justice.
“We are training people who provide free legal services, like human rights activists, lawyers from Legal Aid Council, who are the vanguard of ensuring equal access to justice”, Enedah, who is also a partner in the law firm of Punuka Attorneys and Solicitors stated.
AGA-Africa is a non partisan organisation whose work with governments of nine African countries and civil society organisations is to provide legal training and strengthen the rule of law which is specific to the need of each country.