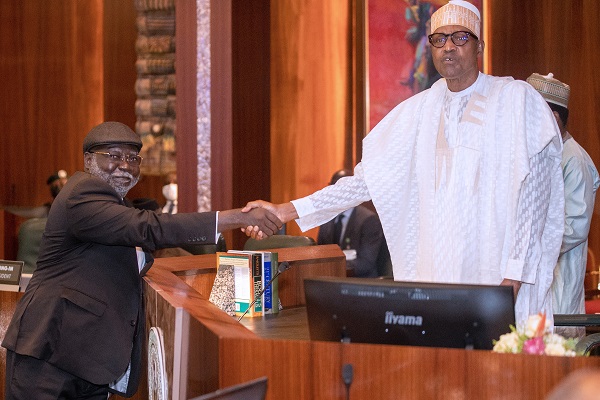 Acting Chief Justice of Nigeria, Olukayode Ariwoola (left), in a handshake with President Muhammadu Buhari after he was sworn in at the Council Chambers, State House, Abuja……… on Monday.

WITH the sudden resignation of Justice Tanko Muhammad as the Chief Justice of Nigeria on Monday, perhaps due to a unanimous memo raised by 14 of his brother Justices accusing him for maladministration, financial misappropriation and outright corruption which are hampering the day to day running of the apex court, President Muhammadu Buhari a few hours afterwards swore in the next most senior judicial officer, Justice Olukayode Ariwoola as the Acting Chief Justice of Nigeria.

The swearing in ceremony took place at the Council Chambers of the State House, Abuja by 3.00pm Nigerian time.

Born on August 22, 1958, Justice Ariwoola, who hails from Iseyin, Oyo State, was formerly a Justice of the Court of Appeal before being elevated to the Supreme Court Bench in 2011.

Since the Buhari-led regime took over in 2015, it has appointed three Chief Justices in both acting and substantive capacities.

In January 2019, however, Onnoghen was suspended for alleged false asset declaration, paving the way for the Bauchi-born Justice Tanko Muhammad, who suddenly resigned on Monday morning for an undisclosed health issue.

Justice Ariwoola will serve in an acting capacity until confirmed by the Senate under President Buhari’s request.

The President also conferred on the outgoing CJN with the national honour of Commander of the Order of the Niger, (GCON).

In attendance were Vice President Yemi Osinbajo; Secretary to the Government of the Federation, Boss Mustapha; Inspector-General of Police, Usman Baba; other Justices of the Supreme Court, Director-General of the State Security Service, Yusuf Bichi, amongst others.