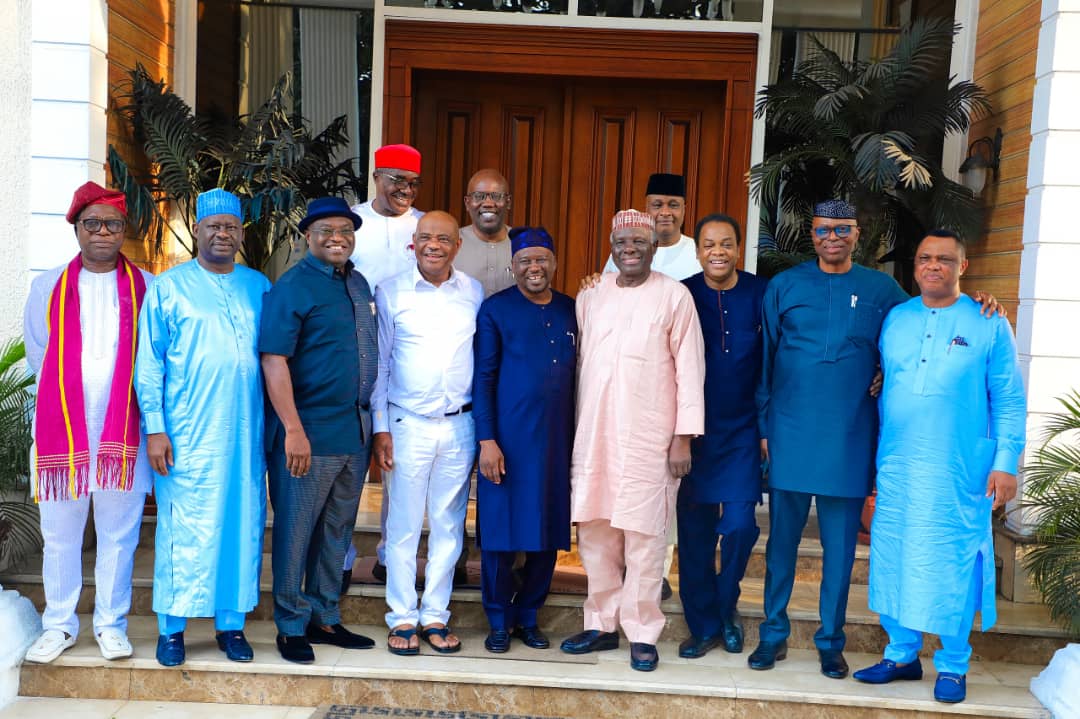 Members of the reconciliation committee of Atiku and Wike’s camps in Government House, PortHarcourt, Rivers State capital…….. on Friday.

Members of the committee constituted by the Peoples Democratic Party presidential candidate, Atiku Abubakar and the Rivers State Governor, Nyesom Wike, have begun discussion with a view to ensuring reconciliation.

This was contained in a statement issued by Mr. Kelvin Ebiri, media aide to Wike and made available to newsmen.

Addressing journalists after the end of the meeting which lasted for about four hours, Fintiri stated that talks were ongoing to achieve the desired objectives.

This, he opined, is in cognisance of the fact that Nigerians were waiting patiently for the PDP to wrest power from the ruling All Progressives Congress in 2023, and redeem the country from the bad governance brought about by the current federal government.

He urged Nigerians to be patient and expressed optimism that at the end of the day the committee would broker peace, unify the party and Nigerians.

“We are aware that Nigerians are anxious and waiting for the PDP to take over government in 2023.

“We have met as leaders, members of the same political family and we have opened the discussion, work is in progress and we will continue.

“At the end of the day, we will broker peace and we will unify the party and Nigerians,” Fintiri asserted.

Also speaking, Mimiko noted the agreement by members of the committee to bring about unity in the party would be achieved soon.

Mimiko hinted that the committee would meet again to further deliberate on issues that need to be addressed.

“We have agreed that there is a need for us to enhance unity within our party.

“This is a reconciliation process, there are some issues out there which needs further deliberation when the committee meets again,” he said.

Atiku and Wike had agreed to constitute the committee at a meeting they held in Abuja a few weeks ago at the residence of a former Minister of Information and National Orientation, Prof. Jerry Gana, as part of the framework for the resolution of their differences.

Members of the committee later met with Wike at his private residence in Rumueprikom, Obio/Akpor Local Government Area of the state.