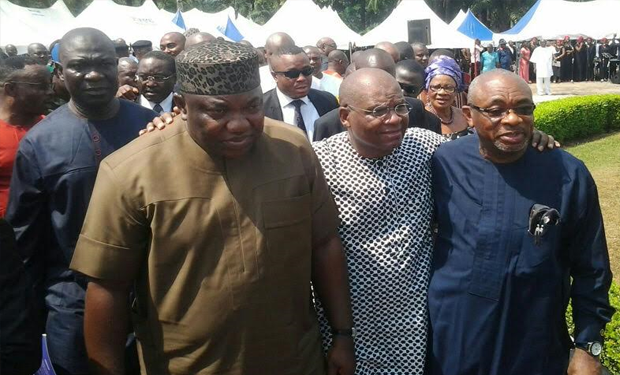 The Over 1,000 members of the All Progressives Congress(APC),in Agbani, Nkanu West Local Government Area of Enugu State have rejoined the Peoples Democratic Party, (PDP).
The defectors said their decision was informed by the sterling performances in office by Governor Ifeanyi Ugwuanyi of the State.
Agbani is the country home of the former Governor Chimaroke Nnamani, who some time was reported to have returned to the PDP.
Receiving the defectors at the event which took place at Agbani Town Hall, the Chairman of Nkanu West Local Government, Hon Henry Okenwa charged them to work with existing members to ensure that the party converted all the members that had joined APC or any other party.
Okenwa said that “the PDP has a big umbrella that can cover everybody”, stressing that “Governor Ifeanyi Ugwuanyi has shown that the PDP umbrella is too big for the privileged few as was witnessed in the past which made some of you to defect to APC.”
In his remarks, the chairman of PDP, Agbani ward, Comrade Osita John Nneji said that there was no magic in the mass entrance of members into the PDP rather than, “we went around to our people and preached to them on the importance of being in PDP and they accepted.
“They might also have seen the benefit of joining the PDP, having tested the APC bitter leaf.“From our record, we have about 1,200 people who have registered afresh and all of them are from APC.”
Nneji said that the Peoples for Democratic Change (PDC), the party founded by their brother and former governor, Nnamani was no longer existing in the area as it has collapsed its structure into the PDP.
Some of the defectors told our reporter that they were encouraged by the widespread development projects Governor Ugwuanyi had initiated in their local government, especially the reconstruction of Agbani Road.
In an interview, the Traditional Prime Minister of Ogbeke Agbani Autonomous Community, Comrade Sunday Edeagu, who also returned to the PDP, explained that he left the PDP in anger, adding, “but now, I have realized that there is no other party in Nigeria today that is better than PDP.”
“Although, APC is controlling the centre, from the look of things, the party is not performing; they are just making noise.“There is no security, no employment as they promised. They have failed Nigerians who believed that once they took over power, the country will start witnessing new lease of life,” he said.