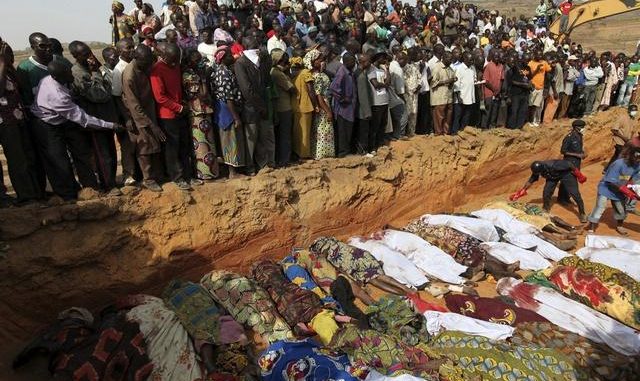 Fulani herdsmen killings in Plateau
The mass burial of victims killed by suspected Fulani herdsmen in several communities in Bassa Local Government of Plateau State was on Tuesday disrupted by a fresh attack which left 25 persons dead.

Those to be given mass burial today were murdered between Thursday, March 8, 2018 when President Muhammadu Buhari paid an official visit to the beleaguered state, and Sunday, March 11.

During the latest attack which took place by 7:00pm on Monday, 11 houses were also razed down.

Persons suspected to be Fulani herdsmen were said to have killed the 25 persons, including three children and two women, in Dundu Village of Kwall District in Bassa LGA of Plateau State.

The spokesperson of Miango Youth Development Association, Lawrence Zongo, confirmed the casualty rate in an interview with The PUNCH in Jos on Tuesday.

“Eleven houses were razed down. The villagers were attacked around 7pm yesterday (Monday). Among the victims were three children and two women.

“Others, including two women, are now receiving treatment in a nearby hospital in the community. This is too bad, as we are planning the mass burial of the last attack.

“So far, we have more than 500 Internally Displaced Persons camp. International organisations should please come to our aid.”

When contacted, the spokesperson of Plateau State Police Command, Matthias Tyopev, an Assistant Superintendent of Police, also confirmed the attack , but said the information was sketchy.

“As such, he is there now. The information is sketchy. I shall inform you when the details of the attack are made available, please.”