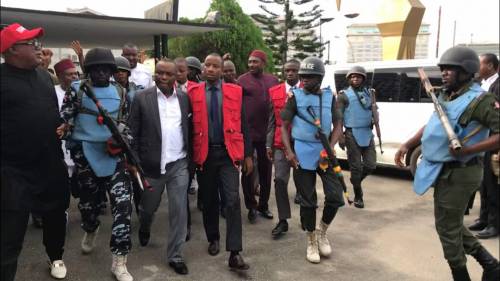 Senator Nwaoboshi (middle) being escorted out of the courtroom by EFCC officials
A Federal High Court sitting in Ikoyi, Lagos on Wednesday broke the jinx when it ordered the remand of the serving senator representing Delta North in the National Assembly, Peter Nwaoboshi, in prison custody.
The remand order was made by Justice Mohammed Idris shortly after Nwaoboshi was arraigned for an alleged fraud of N322m by the Economic and Financial Crimes Commission.
Nwaoboshi, an ally of a convicted former governor of Delta State, James Ibori, was brought before the court amidst heavy security.
The court premises was flooded by scores of his loyalists, who trooped after the arms-bearing policemen as Nwaoboshi was being led into the courtroom for his arraignment.
The lawmaker was charged with two counts alongside two firms – Golden Touch Construction Project Limited and Suiming Electricals Limited.
The charges border on conspiracy and money laundering.
The EFCC, in the charges, claimed that Nwaoboshi and Golden Touch Construction Project Limited purchased a property known as Guinea House, Marine Road, Apapa, Lagos for N805m between May and June 2014.
The anti-graft agency claimed that N322m out of the N805m, which Nwaoboshi and the firm paid for the property, was part of proceeds of “an unlawful act, to wit: fraud.”
The EFCC alleged that the N322m was transferred to the vendor of the property on the order of Suiming Electricals Limited.
Suiming Electricals Limited was accused of aiding Nwaoboshi and Golden Touch Construction Project Limited to commit money laundering on or about May 14, 2014.
The prosecution said the defendants acted contrary to sections 18(a) and15 (2)(d) of the Money Laundering (Prohibition) Act 2011 and are liable to punishment under Section 15(3) of the same Act.
But upon their arraignment, the defendants pleaded not guilty.
Nwaoboshi’s lawyer, Mrs. Velerie Azinge (SAN), while moving an application for her client’s bail, urged the court to admit the senator to bail on self-recognisance or in liberal terms.
Azinge said besides suffering from a heart-related ailment, Nwaoboshi, a senator, would not jump bail, as, according to her, he must always attend Senate proceedings, failing which his seat would be declared vacant by the Senate President.
“This is a case of a pure commercial transaction,” she added.
Azinge stressed that should the court be unwilling to admit Nwaoboshi to bail on self-recognisance, the terms of the bail should be liberal.
She said, “Alternatively, in the event that the court is not minded to grant bail on self-recognisance, we will be craving the court’s indulgence to grant bail in the most liberal terms.
“Even the head of the Senate himself, Dr. Bukola Saraki, is before the court of law and yet he’s still presiding over the Senate proceedings.”
The prosecuting counsel for the EFCC, Abubakar Mohammed, told the court that the anti-graft agency filed a counter-affidavit in opposition to Nwaoboshi’s bail application.
He, however, conceded that the decision to grant the bail was on the judge’s discretion.
After hearing them out, Justice Idris adjourned till April 27, 2018 for ruling while he ordered that Nwaoboshi should be remanded in the prison custody until then.

As he emerged from the courtroom while being led by policemen towards the transit cell on the court premises, Nwaoboshi was greeted with the shouts of “Oshimiri” by a crowd of his supporters, who sat outside the courtroom, while the court proceedings lasted.