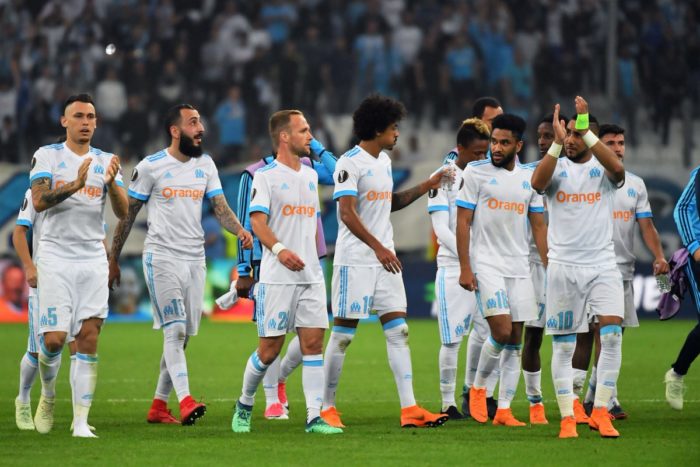 Olympique de Marseille’s Dimitri Payet set up both goals as he guided the team to an impressive 2-0 home win over Salzburg in the first leg of their Europa League semi-final on Thursday.

In London, a late equaliser from French striker Antoine Griezmann gave 10-man Atletico Madrid a precious away-goal advantage over Arsenal in the first leg of their Europa League semi-final at the Emirates.

A night which looked like Arsenal’s ended with a 1-1 draw on Thursday.

Arsenal were given a huge boost after 10 minutes when Atletico defender Sime Vrsaljko was sent off for stamping on Alexandre Lacazette’s foot.

Atletico coach Diego Simeone was also sent to the stands for his furious reaction to the decision.

Arsenal missed a number of clear chances before Lacazette broke the deadlock in the 61st minute, heading Jack Wilshere’s cross down into the corner to put the home side in front.

Atletico seized back the initiative in the 82nd minute, however, when Griezmann sped past Arsenal defender Laurent Koscielny.

The Frenchman collected his rebounded shot off keeper David Ospina and calmly lifted the ball into the roof of the net.

The teams head back to Madrid for the second leg next week when Atletico, second in Spain’s La Liga, should have talismanic striker Diego Costa back in their line-up.

In Marseille, Florian Thauvin headed in Payet’s free kick after 15 minutes and Clinton Njie calmly slotted home in the 63rd to put Marseille in the driving seat against the Austrian champions.

Payet has played a key role in Marseille’s run to the last four with five assists and three goals in the knockout stages.

The Frenchman is making a late bid for a place in France’s World Cup squad with an impressive run of form.

Salzburg’s Fredrik Gulbrandsen had their best chance when he volleyed against the post late in the second half.

The second leg of the semi-final match will be decided on May 3 as Marseille travel to Austria with a two-goal advantage.