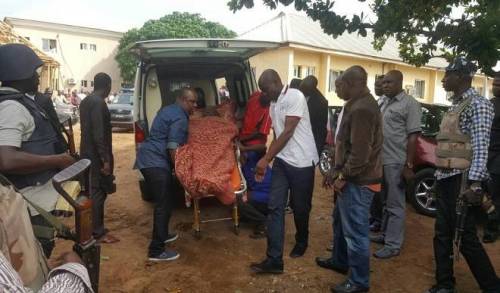 Melaye being brought out on stretcher from an ambulance for arraignment.

The senator, who is allegedly battling with some health complications, came into the court yard in an ambulance.

It will be recalled that Melaye was also arraigned on Wednesday by the Police at a Chief Magistrate Court in Wuse Zone 2, Abuja, for allegedly attempting to escape from lawful custody and also threatening to commit suicide.

Although he was granted bail in the sum of N90 million and two sureties with his travelling document seized, he was rearrested by the Police for other pending accusations.

“The Police investigation team rearrested Senator Dino Melaye yesterday, 2nd May 2018 after his arraignment at Chief Magistrate Court, Wuse for the pending offences of Criminal Conspiracy and Unlawful Possession of Prohibited Firearms already filed in a Court of competent jurisdiction in Lokoja for which he will be arraigned without further delay,” a Police statement said.