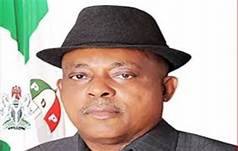 National chairman of PDP, Uche Secondus
Gbenga Joseph, Ado-Ekiti
Leaders of the People’s Democratic Party in Ekiti State, on Thursday shut down the secretariat of the party  located along Ajilosun Street,  Ado-Ekiti, the Ekiti State capital.
The operation which lasted for one hour was led by a member of the state working committee and former Secretary of the party in the state, Dr.Tope Aluko and other party stalwarts  chased some officials and workers in the office out and lucked up the office.
Speaking with journalists shortly after the operation, Aluko alleged that some State Working Committee  SWC  members of the party allegedly carried out   nefarious  activities by withdrawing millions of Naira  belonging to the party in the bank.
Already the party secretariat has been taken over by the police following action of the stakeholders,  waiting for further directives from the  leaders of the party who are Governor  Peter Ayo Fayose, Senator  Biodun Olujimi,  Senator Duro Faseyi and Senator Clement Awoyelu.
He explained that some concerned members of the party in the state decided to carry out the lock up operation in order to save party from going into extinction and to prepare the party ahead of 2019 general elections.
“We already have some aggrieved members following the alleged imposition that in the last primary of the party and we are worried as we are concerned stakeholders
“We are here today to lock up the party secretariat, not because of anything, but because of some nefarious and fraudulent activities among our members, after the exit of our leaders Dr Ayodele Fayose, we found out that the National Working Committee (NWC) has not been responsible to the issues on ground.
“We are carrying out this action today after consultation with some of our leaders of the party and they gave us the mandate to go ahead until further directives of the party leadership” Aluko stated.
But in his reaction the PDP spokesman in the state,  Jackson Adebayo queried Aluko’s action  saying “what concerned Tope Aluko in the running of affairs of our party.
“As far as I’m concerned,  Tope Aluko is an expelled member of our party and he does not have moral standing and he is not qualified  to query,  question,  or throw a challenge on  how we run our party in Ekiti”.  Adebayo stated.
As at the time of writing this story  the secretariat located is still under lock and key put in place by Aluko,  until further directives from the leaders,  while the police took over the office probably to prevent breakdown of law and order following the report of the case by Aluko to the police.
Sportlight