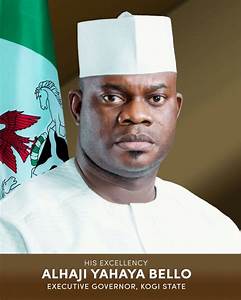 By our investigative Correspondent.
Kogi State, the confluence state, being centrally located in the country, should ordinarily draw high volumes of traffic from visitors either seeking to do business in the state or for pleasure.

This is a fact considering the strategic location of the state as a link between the Federal Capital Territory, Abuja and other parts of the country. It is the only state that connects ten other states in Nigeria. Investors see the state as a safe investment destination because of its mineral resources.In his inaugural address as the 4th Governor of the state, Yahaya Bello identified insecurity as a huge concern across the state. He specifically identified armed robbery and kidnapping as two striking menace that must be quickly tackled and tamed.The situation met by the governor was worrisome.

Indigenes and visitors alike were forced to reduce their business hours and scope of operation if not out rightly shutting down and moving out of the state.
More worrisome was the discovery by security agents of the presence of Improvised Explosive Device (IED) in the state. Also, guns, rounds of live ammunition and other dangerous items were discovered in a forest between Kogi and Edo State. These discoveries underline the dangers of thick vegetation along our highways.

There were also security reports that criminals were using the state’s thick vegetation as hideouts and ambush spots.In an interview, the Chairman of Ajaokuta Local Government Area, Prince Aliu Mustapha Akaba, reechoed the prevalent security situation and said some of the roads in the state had been abandoned for a long time with grown vegetation in the middle of the road. This, he explained, provided shelter for hoodlums and kidnappers, who kill, maim and rape. He narrated the kidnap incidence of the Director of Local Government Services, Ajaokuta LGA andthe fact that he was one time kidnapped as well.Also, His Royal Highness, Oba Francis Oke Mibole, Elesiio of Iwaa Land was not spared fromthe near-harrowing experience of kidnapping.

The monarch explained that on one of his trips to Lokoja on this faithful day, he was accosted by three men armed with AK 47 rifles who attempted to impede his movement, shooting several rounds directly at his car. He said he was indeed lucky to have escaped unhurt. His vehicle still bears holes from the gun shots.In response to the security situation, Governor Yahaya Bello commissioned a road vegetation clearing project in March, 2017. Work on the project is to cover several localities and involve theclearing of bushes for security, agricultural purposes and canalization.

This will remove vegetation that obscure visibility on the roads and serve as hiding areas for hoodlums as far as forty meters from the shoulder on both sides of the road. The project is in phases and has continued yearly since 2017. So far Ganaja to Ajaokuta; Okene to Ajaokuta; Okene to Okpella, Itobe to Anyangba, Anyangbato Egume Okuru; Ejule to Alooma; Obajana junction to Kabba; Okura to Ankpa, Ofu to Idah and Alooma to Otukpa have all been made safe.The project is being handled by Stardust Construction Works Limited an indigenous construction company.

Explaining the scope and essence of the project, Executive Director operations, Mr Emmanuel Okpe, Stardust Construction Works Limited, said that the project is being implemented to help reduce the prevalence of criminal activities on the roads covered.He explained that the distance of clearing is between 20-40 meters on both sides of the road which invariably affords the road user visibility of up to 500 meters. He added that it would be of immense impact if other state governments who share boundaries with Kogi could replicate the same project.

“This way the fight against banditry would enjoy a massive boost within the region”.“Aside the advantage of better visibility, the clearing of dense vegetation along these roads also presents the possibility for road expansion in the future,” he said.As a direct fallout of the multi-pronged approach deployed by the Bello Administration in combating the menace of insecurity, a 2018 report on Nigeria Peace Index rated Kogi state as the second most peaceful state in Nigeria. It came second, narrowly losing to Osun State for the first position. Many did not doubt the report as the state had maintained a relatively peaceful ambiance – attracting people from far and wide.

The inaugural peace index report was put together by the Foundation for Peace Professionals, a research organization that advocates for peace. That report meant that the state was safe for investors.Already, residents and road users along these areas are feeling the immediate impact of this road project. According to them, the spate of accidents and incidences of kidnapping and armed banditry has greatly reduced on these roads.This was corroborated by the Elesiio of Iwaa Land, His Royal Highness, Oba Francis Oke Mibole, who commended Bello for the impactful project that has restored confidence in the people who can now move freely without fear.The monarch said: “This is the best project I have ever seen being carried out by the Kogi state government led by Yahaya Bello.”

Another resident of the state, Moses Gabriel expressed his gratitude to the state government for the project which has helped them return food to their tables since they can now freely commute to their farms. Gabriel, who is a farmer in one of the benefiting communities, noted that the new road project has made movement easy for farmers.Another user of one of the roads, Emmanuel Bello, said that it is now safer to travel on the roads because of improved visibility.

He attributed this feat to vision of the state government to secure citizens of the state. Another resident, Isa Abdullahi said everyone can now sleep with both eyes closed as the spate of armed robbery and kidnapping have greatly reduced. Relieved and happy with this new development the people of Kogi state are full of praises for the Bello administration. Now that there is no longer dense vegetation providing hideouts for criminal elements and now that motorists and road users have a clear view of the roads, the state can begin to expect increased business activities and visitors. Kogi state, it seems, has risen from the dark ashes and is moving in a new direction under governor Bello.