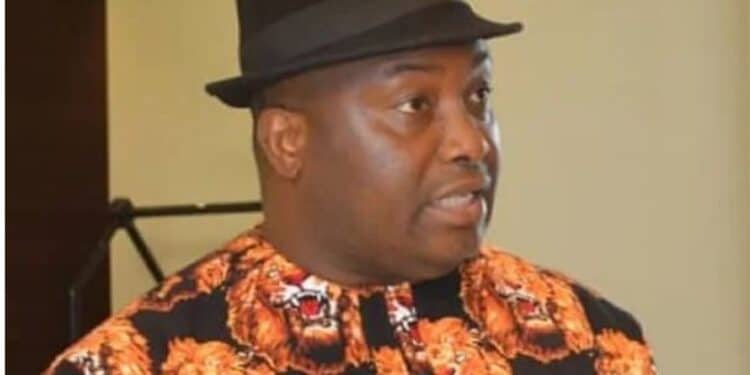 By Political Editor.
In what appears to be a twist of fate and unimaginable expression of confidence, a popular preacher and founder of the INRI Evangelical Spiritual Church Worldwide, Primate Elijah Babatunde Ayodele has spritually predicted that Senator Ifeanyi Ubah has the brightest chance of winning the forthcoming Anambra State governorship election scheduled for November 6, 2021.
Speaking on Ubah’s chances in his latest predictions on the hotly contested election, Primate Ayodele, who is reputed for making prophecies that have hit the mark previously, said that “victory is surrounding him.”
Warning the billionaire oil magnate to avoid being rigged out “technically,” Primate Ayodele urged Ubah to avoid any missteps in order to “take victory.”
He stated that Ubah, whose rags-to-riches story is regarded as the best reflection of the ‘Nigerian Dream,’ “has what it takes” to emerge victorious, adding that “victory is close to him.”
Primate Ayodele had in his latest prophecies dismissed the chances of both the ruling All Progressives Grand Alliance (APGA) and All Progressives Congress (APC), saying: “Nobody is ready for APGA and APC in Anambra but both parties are bent on taking it by force.”
Unlike Ubah, Primate Ayodele said the Peoples Democratic Party (PDP) candidate, Mr. Valentine Ozigbo can only win the election if he goes into a “coalition” with others. According to him, PDP should “wake up, get a coalition and put its house in order.”
It is recalled that Primate Ayodele had in his first prophecies on the forthcoming election at a media parley to unveil the 2021 edition of his award-winning book, ‘Warning To The Nations,’ again predicted an Ifeanyi Ubah victory if the crises in APGA persists.
His words: “Let me take it from the APC; APC has no candidate, APC will not win at all. Two, PDP is not ready to win Anambra, the only way Ifeanyi Uba can win is if APGA has problem. Ifeanyi Ubah should go on prayers and say, ‘God confuse APGA.’ Otherwise, give it to APGA again. Ifeanyi Ubah will perform if he becomes Governor of Anambra State.”
Coming on the heels of his predictions, Mrs. Bianca Odumegwu Ojukwu, wife of the late Biafran leader and spiritual leader of the party, Dim Emeka Odumegwu Ojukwu shunned the party’s flag-off campaign, saying the leadership of the party was bent on wiping off the memory of her deceased husband from the party. The APGA crises peaked recently with the sensational decamping of its two-time and sitting Deputy Governor, Dr. Nkem Okeke to APC.
Analysts believe that the latest crises bedeviling APGA give further credence to Primate Ayodele’s prophecy that Ubah will emerge victorious at the poll.
Primate Ayodele has been publishing “Warnings to the Nation” since 1994. Among the prophecies that have been given so far in the past editions, more than 10,000 of them are said to have come to pass. He has been celebrated far and wide due to the uniqueness of his prophetic ministry. In Africa, he is the only prophet that publishes a book of prophecy.