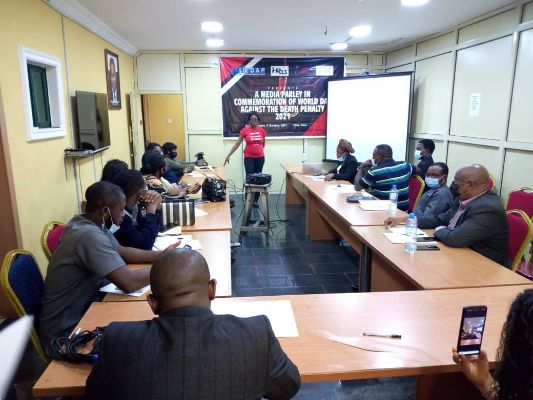 Participants at this year’s one-day media parley on the abolition of death penalty held at Ojodu, Ikeja Lagos…….recently.

As the world marked the 19th anniversary against Death Penalty; the Legal Defence and Assistance Project (LEDAP) and Human Rights Law Service (HURILAWS) have called on Nigerian government for an immediate review of the use of capital punishment or death penalty in Nigeria, particularly against women and the poor, pending a wholesome reform of the country’s criminal justice system to foster the arrival at guilty sentences devoid of reasonable doubts.

This was the verdict as conveyed by two civil society organisations: Legal Defence and Assistance Project (LEDAP) and Human Rights Law Service, (HURILAWS) at a media parley in Lagos held recently to sensitize the public on the dangers of continuing to retain death penalty in the nation’s criminal justice system.

According to them this form of punishment has become outdated and archaic all over the world especially as it is targeted mainly against the poor, the vulnerable and the ignorant in Nigeria, who the law enforcement agencies take advantage of by extracting forced confessional statements which the courts use for such questionable convictions.

This strong position by the CSOs was given against the backdrop that most countries in the world including African States, like Sierra Leone had already abolished the death penalty in their justice system. They therefore wondered why the giant of Africa, (Nigeria), is taking the back seat in this regard considering the fact that this obnoxious practice is discriminatory against the poor at the exclusion of the rich, and therefore contravenes the right to life and right to freedom from cruel and inhuman treatment.

The opinions by the CSOs were presented by two anchors: Mrs Pamela Okoroigwe for LEDAP and Mr. Collins Okeke, standing for HURILAWS.

To Mrs. Okoroigwe: “If Nigeria continues this death penalty punishment without any consequential change in attitude of would be criminals, it then means that ‘there is no evidence that capital punishment deters crimes in as much as our criminal justice system is still inefficient with a corrupt institution like the Nigeria’s Police.

Speaking in the same vein, Mr. Okeke for HURILAWS said: “Death penalty impacts on women in many different ways hence critical mitigating factors that need to be considered during the arrest and trial of women said to have committed offences that carry death sentence as punishment.

October 10 is the day set aside globally to advocate for the abolition of the death penalty. The theme for this year’s anniversary is “Women and the Death Penalty; an Invisible Reality”. This year’s event focused on women who have been executed, sentenced to death, or have had their death sentences commuted, exonerated, or pardoned, while still drawing attention to the peculiarities and factors that predispose women to alleged crimes and weigh on their sentencing.

Gender based discrimination often coupled with other factors such as age, sexual orientation, disability, religion, and culture expose women to intersecting forms of structural inequalities and such prejudices can weigh heavily on sentencing. This discrimination can also lead to inadequate consideration of critical mitigating factors during arrest and trial, including the specific vulnerabilities of women and likely patterns of abuse and gender-based violence that could have been triggered.

“While working towards the complete abolition of the death penalty worldwide for all crimes and for all genders, it is crucial to caution against the discrimination women in Nigeria face and the impact of such discrimination on women in conflict with the law within our criminal justice system.

The CSOs expressed regret over the recent call by the Minister of Interior, Ogbeni Rauf Aragbesola, urging state governors to sign death warrants as a measure to decongest the Correctional Centres in the country even though it is common knowledge that prison congestion is caused by ‘awaiting trial’ inmates.
They continued: “We reckon that in July 2021, the Minister of Interior, Rauf Aregbesola issued a call on state governors to consider signing warrants of death row inmates in states across Nigeria as a way of decongesting the correctional facilities. LEDAP had in an earlier statement recommended that the country should rather focus on reducing the 74% of awaiting trial inmates in our correctional facilities than executing death row inmates as a decongestion measure.

“LEDAP on behalf of all death row inmates in Nigeria filed a suit at the Federal High Court sitting in Abuja in Suit No: FHC/ABJ/CS/1169/2020, Nnenna Obi & amp; Godwin Pius v Comptroller General of Prisons & amp; 36 Governors seeking a declaration that the imposition of capital punishment infringes the right to dignity of human person and seeks a restraining order against the Comptroller General of Prisons and the 36 State governors of Nigeria from executing death row inmates.

In a bid to resolve this lingering issue, the CSOs appealed to government to show human kindness by stopping to stain its hands with the blood of presumed ‘innocent’ convicts” by officially signing the moratorium.

Their words: “We call on Federal and State Governments to announce an official moratorium on all executions in Nigeria until all inadequacies in our criminal justice system are addressed and to amend our laws that provide for death sentence and replace same with life imprisonment or a term of years”.