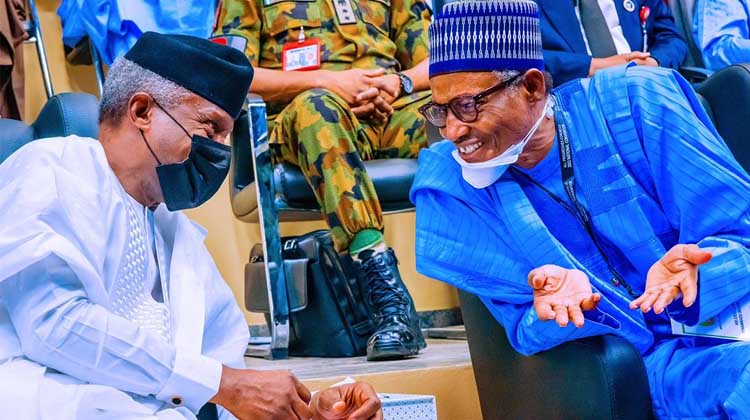 THE offices of the President and Vice-President will spend N11.92billion on local and foreign trips and the presidential air fleet.

The amount also includes N1.58b earmarked for aircraft maintenance and N1.60b allocated for the overhaul of the Gulfstream GV and CL605 aircraft engines.

Members of the National Assembly, on the other hand, will get N100bn for constituency projects, which according to the Independent Corrupt Practices and Other Related Offences Commission, have been characterised by corruption.

Sunday PUNCH reports that the President Muhammadu Buhari on Friday presented to a joint session of the National Assembly a budget proposal of N20.51thrilion for the 2023 fiscal year.

The budget is about N750bn higher than the N19.76tn earlier proposed in the 2023-2025 Medium Term Expenditure Framework and Fiscal Strategy Paper.

In the document, the PAF’s budget is categorised under the Office of the National Security Adviser.

Aircraft fuelling will cost the government N250m, purchase of air navigational and defence equipment will gulp N1.50b, while N650m will go for a new mobile helicopter landing pad.

Bank charges will gulp N36.15m and insurance premium on all 10 aircraft in the fleet is expected to cost N180m.

The Presidency had revealed that the PAF maintains 10 aircraft since the inception of the Buhari regime in May 2015.

However, not all of the money will be directly flight-related.

Both offices will also spend a total of N508.71m on foodstuffs and refreshments. The amount stands at N331.79m and N176.92m for the offices of the President and Vice-President, respectively.

Closer comparison of the fiscal budgets for 2022 and 2023 revealed a 54.64 per cent drop in the PAF allocations.

In the 2022 budget proposal, 22 items were designated as new or ongoing projects. These items amounted to N8.13b.

In the 2023 proposal, however, only nine items were labelled as new or ongoing, amounting to N3.44b.

Amid scarce resources, the Federal Government has again proposed N100bn as constituency budget for the statutory Zonal Intervention Project, which will be implemented by members of the National Assembly.

Despite the fact that the budget will be largely funded with loans, it was observed that the allocation for the statutory N100b constituency projects was not reduced.

This means that the Federal Government in six years had spent over N600b on lawmakers’ constituency projects.

There have been controversies over the execution of constituency projects by lawmakers with the President also condemning the abuse of the allocation.

Buhari had said, “It is on record that in the past 10 years, N1tn has been appropriated for constituency projects, yet the impact of such huge spending on the lives and welfare of ordinary Nigerians can hardly be seen.”

The allocation for the renovation of the National Assembly complex was not expressly stated, but it was categorised under government buildings with N1.7b allocated.

During an oversight of the National Assembly complex renovation work, the Minister of the Federal Capital Territory, Muhammad Bello, had hinted that N21.029b was needed to complete the rehabilitation.

Meanwhile, the government will be spending a total of N299.8bn on salaries and wages of lecturers and other categories of workers in federal universities next year.

The figure does not include the amount that will be paid as salaries to lecturers and workers in inter-university centres such as the Nigerian French Language Village; the Arabic language Village, Borno; National Institute for Nigerian Languages; and the International Centre for Biotechnology, University of Nigeria, Nsukka.

Our correspondents discovered that all the federal universities would spend nothing less than N6.5b on electricity charges and generator fueling.

But experts in the sector, including a former Deputy Vice-chancellor of the University of Uyo, Prof Ini Uko, noted that there was a need for the government and other stakeholders to develop alternate funding plans for Nigerian universities so as to remove the strain on the government and better the situation of things in the university system.

According to the 2023 appropriation bill, lecturers and workers in federal universities, including the National Open University of Nigeria, will earn N299,824,662,756 as salaries and wages.

Further analysis of the budget document revealed that the federal universities would spend nothing less than N6.5b on electricity and generator fueling.

The Nigerian Maritime University will be allocated N80m for plant/generator fueling; while Bayero University, Kano, will get N89.1m for the same purpose.

Uko said, “Let the students be made to pay something more than they are paying now so that the universities can run without ASUU shouting again.

“Let all the stakeholders sit down and decide how we can run the system properly, otherwise what will happen later, especially now that ASUU will no longer talk again; our people here are saying they will no longer complain about the ways universities are being run again.

“Let the government sit down and decide the role they want to play and the role the parents should also play. For the poor parents and students, let there be a window for them in terms of loan schemes; if not, we will be in for something very funny. With the way new universities are also being added, we need to work more.

“But if the government is insisting that they want to fund the universities 100 per cent, they must set aside a trust fund like the one in Norway, which has a trust fund where the crude oil earnings go into. So, we need to put preparations in place to make the way we run our universities sustainable.”

Another educationist, Dr Dipo Awojide, said, “The model for funding the higher education sector that we have used since the 1980s has largely failed. It has not been sustainable and this is one of the reasons the Academic Staff Union of Universities has gone on strike repeatedly in the last 40 years.

“We need to do things differently going forward. Full autonomy for all our federal universities should be considered. Investments in real estate, grants from the government, philanthropy from individuals and industry partners, endowment from alumni, research grants and tuition from students are different revenue generating sources that can be considered by all federal universities in Nigeria.”

But a professor at the Adekunle Ajasin University, Akungba, Victor Olumekun, disagreed with Uko and Awojide.

“I am never in support of the government abdicating its responsibility to the nation. If you don’t spend on education for national development, what else? Funding of education by the government must be a priority,” Olumekun stated.

Meanwhile, the national carrier, Nigeria Air, will gulp about N1.3b in the 2023 fiscal year.

The Minister of Aviation, Hadi Sirika, announced in September that Ethiopian Airlines Consortium was selected as the preferred bidder after a careful, detailed and the Infrastructure Concession Regulatory Commission-governed selection process.

He said Ethiopian Airlines would own 49 per cent; a consortium of three Nigerian investors, MRS, SAHCO and the Nigerian Sovereign Fund, 46 per cent; while the Federal Government would own the remaining five per cent.