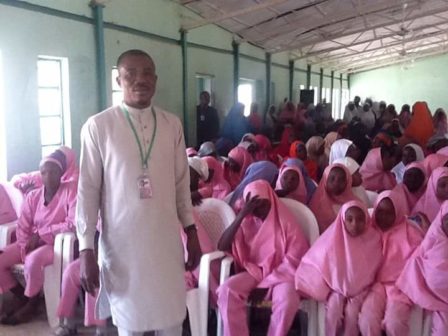 A sizeable number of Dapchi schoolgirls abducted by Boko Haram from Government Girls Science and Technical College, Dapchi, Yobe State on 19 February, were on Wednesday morning returned to the community. While the parents and relations of the freed girls were happy and jubilant, the parents of some of the girls who were not among the returned ones were confused, sad and asking curious questions as to why their children were not part of contingent batch.

Reports said 101 girls and a boy out of 110 have been released so far as confirmed by the Minister of Information and Culture, Lai Mohammed, while five others died in custody as a result of exhaustion, and one held back because she refused to renounce her christian faith. The minister also said it was the insurgent group that dropped off the girls on a negotiated agreement that the Nigeria military would not confront them in whatever form.

Meanwhile, all the released children are at the moment undergoing debriefing and medical check-ups, while the fate of the christian girl is yet to be established by the government and its negotiators.

When President Muhammadu Buhari visited Damaturu and Dapchi on 14 March, he promised that his government would do everything possible to rescue the girls.

“On the 19th of February 2018, we woke up to the painful news of the abduction of 110 students of Government Girls Science and Technical College Dapchi. Since this ugly incident happened, I have not left any stone unturned in making sure that the girls are rescued”, he said.

“I have ordered the re-strengthening of a joint operational base involving relevant agencies and services to coordinate the rescue mission.

“Consequently, the service commanders have not only established a unified command centre in Maiduguri, the military has raised several rescue teams to comb the forests in the North East theatre of operations. In addition, the Nigeria Air Force has maintained aerial surveillance of the area.