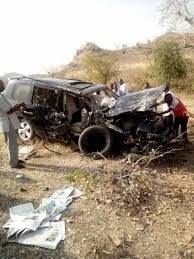 Twelve persons have been confirmed dead and five others injured in an accident involving a Volvo truck and a Ford bus at Foursquare area on Lagos /Ibadan Expressway on Saturday.

Akinbiyi explained that the accident was caused by wrongful overtaking on the part of the Ford passenger bus with registration number AAA 886 XR, which led to a head on collision with the oncoming truck.

He stated that the truck with registration number LSD 138 XQ, was coming from the opposite direction before the accident.

“The accident happened around Foursquare Camp (diversion axis) on the Lagos /Ibadan Expressway.

The TRACE spokesman added that the injured victims were taken to Ife – Oluwa Plus A hospital, Ogunmakin while the corpses were deposited at FOS Mortuary, Ipara. (NAN)