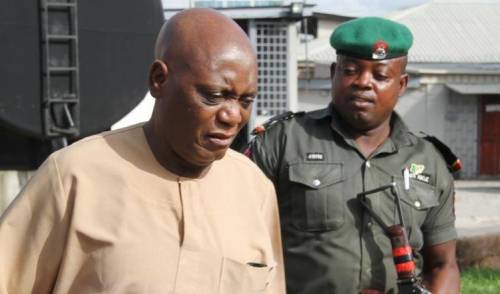 EFCC said the defendants conspired to directly take possession of
N264,880,000, which they reasonably ought to have known formed part of an unlawful act.

Nwosu, who had initially pleaded guilty to receiving N30million bribe from
Mrs Alison-Madueke to rig the 2015 general election results at his
arraignment on April 5, 2017, changed his plea to not guilty when he was
re-arraigned.

Bashir was accused of indirectly taking possession of and retaining
N164,880,000, which he reasonably ought to have known forms part of
gratification.

He also concealed N30million, being part of the proceeds of an unlawful
act: “criminal misappropriation”.

The alleged offences were committed on March 27 and April 7, 2015 and
violated provisions of the Money Laundering Prohibition Act.

Justice Mohammed Idris, who concluded the case despite being elevated to
the Court of Appeal, had on Thursday held that the prosecution proved the
case beyond reasonable doubt.The judge, however, could not pass a sentence on the defendants due to
Nwosu’s absence over ill-health.

Handing the final verdict today, Justice Idris sentenced Nwosu to seven
years imprisonment on counts one and two, and five years on counts three
and four.

Justice Idris sentenced them both to seven years each on count nine.

The judge also ordered the forfeiture of property in Asaba, the Delta
capital worth N25million, as well as N5million cash seized from Nwosu.

Bashir is also to lose his Abuja property.

The sentences are to run concurrently, the judge held.

Justice Idris said: “The convicts were officials of INEC and were expected
to conduct themselves as impartial umpires in carrying out their activities.

“I understand it to be the mission of INEC to serve as an independent and
effective election management body that is committed to the conduct of
free, fair and credible election for sustainable democracy in Nigeria.

“These convicts by their conduct acted in breach of these objectives. Their
actions were a disgrace to the institution and a threat to democracy.

“INEC officials must be made to understand that their conduct must be
within the ambit of the law and that anyone who breaches the law will be
dealt with to the full extent of the law.

“It must be understood that leadership and governance are serious matters
that should be handed over to the most patriotic, best informed minds and
the brightest brains for purposes of accountability, responsibility and
prosperity of our nation.

“This country must not be allowed to descend into anarchy, despondency and political infamy by the conduct of an official of government.

“This country cannot afford an unhealthy electoral body as we go into the
forthcoming election. INEC must note that this country deserves a credible
election. Anyone that acts contrary to the law will be dealt with.

“In this regard, the country only needs those with indomitable courage and
impeccable political will to perform this duty and those who play ignoble
role must be identified.

“Evil communication, they say, corrupts good manners. In the light of the
alocutus, the court will temper justice with mercy to the extent only
permitted by the law.

“Again, a strong message must be sent to INEC that the eyes of the world is
on them. The entire nation is watching and those who decide contrary to
their code of office will be identified.

“When they are identified, they will be prosecuted and if found guilty will
be punished severely.”

Before the verdict, defence counsel Victor Opara had urged the court to
temper justice with mercy, saying Nwosu was a first offender.

He said the convict served in INEC for 35 years and is now 64 years and
unwell.

Bashir’s lawyer K.I. Marcus also urged the court to consider that his
client is a single parent who lost his wife last October and is taking care
of four children alone.